The 13th annual city event, scheduled for May 17 through 19, is sixth stop on pro race series featuring 18 events in 16 states.

An international field of pro cyclists will visit Wilmington May 17-19 for the Wilmington Grand Prix, the sixth stop on the USA Cycling’s Pro Road Tour.

Event Allies, the City of Wilmington and their many partners are once again proud to bring cycling to the streets of Downtown Wilmington as the 13th Annual Wilmington Grand Prix, presented by Bank of America, will be held May 17 through 19. The local race event has grown from a regional bicycle race to one of the premier cycling events on the East Coast. The Wilmington Grand Prix race will be the sixth stop on USA Cycling’s Pro Road Tour (PRT), a calendar of the top road races in the U.S., which attracts pro cyclists from around the world. Last year’s Grand Prix attracted racers from seven countries and 21 states to Wilmington.

“The Wilmington Grand Prix is an important race on our Pro Road Tour Calendar,” said Chuck Hodge, USA Cycling’s Chief of Racing & Events. “Racers love the technical nature of the course and the enthusiastic crowds that greet them.”

“We are very proud to display a national cycling banner in Wilmington, which says to competitors from around the world that Wilmington appreciates the sport of cycling and honors the athleticism and commitment necessary to compete in such a grueling sport,” said Mayor Purzycki. “We invite our own citizens and visitors from the region and across the nation to join us in Wilmington in mid-May for the fun, excitement and competition.” 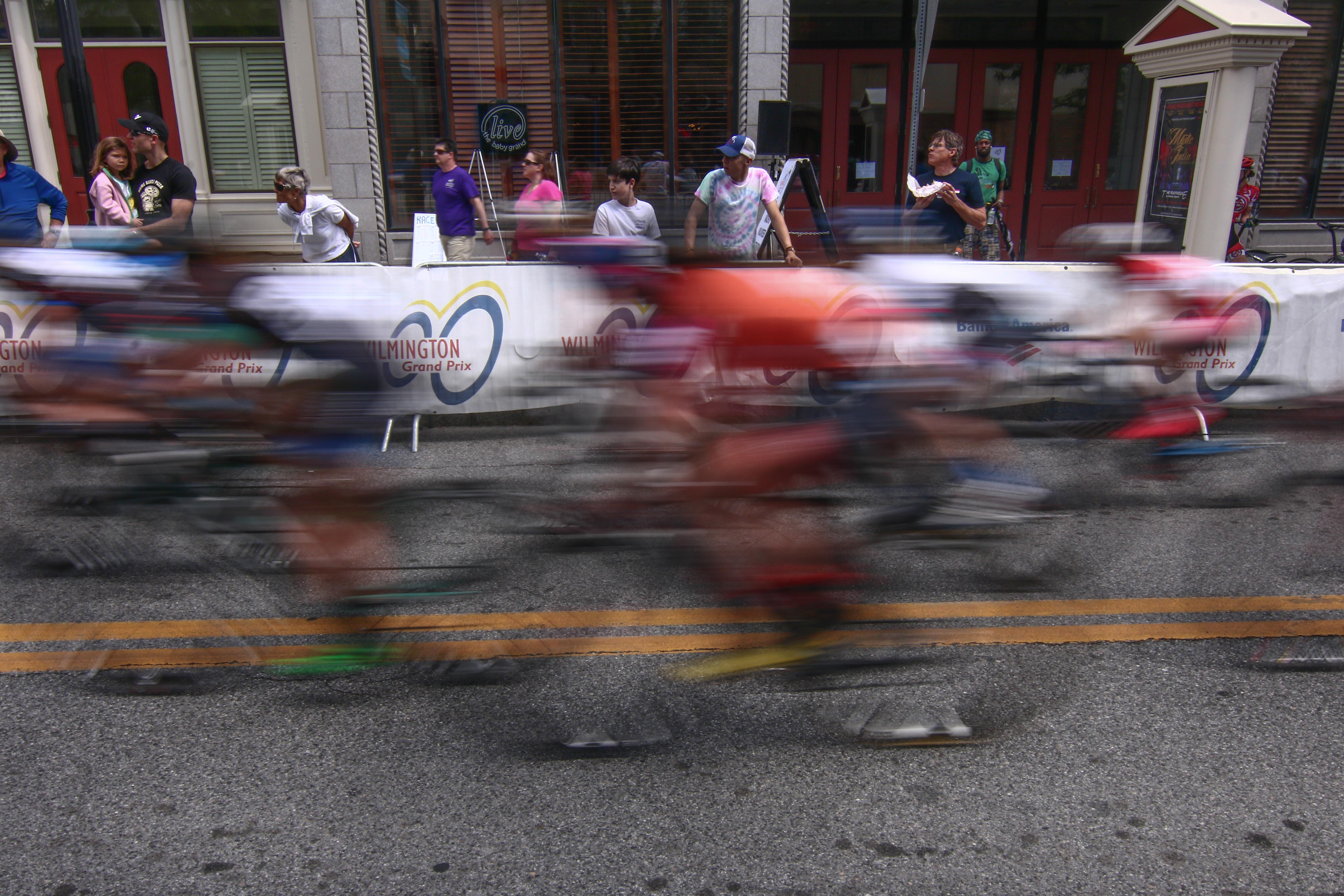 USA Cycling’s (USAC) Pro Road Tour (PRT) spans March to September and features 45 days of road cycling competition. Events are a mix of criteriums, omniums, road races, stages races and individual time trials. The Wilmington Grand Prix is a criterium (fixed number of laps on a closed course held on public streets). The PRT opens March 13-17 with the Redlands Bicycle Classic in California and continues through Arkansas, Alabama, New Mexico, and New York before arriving in Wilmington. Individual and team champions are crowned at the conclusion of the calendar.

“Nothing beats the kickoff event on Monkey Hill with its festival atmosphere,” said WGP Race Director Laura Van Gilder (Crespo, Pa.), one of the winningest female racers in USAC history. “Then there’s the high-speed racing with the pros on Saturday downtown, and the scenic Gran Fondo ride on Sunday through picturesque Northern Delaware. The Grand Prix weekend is steeped in tradition for racers and the local community.” 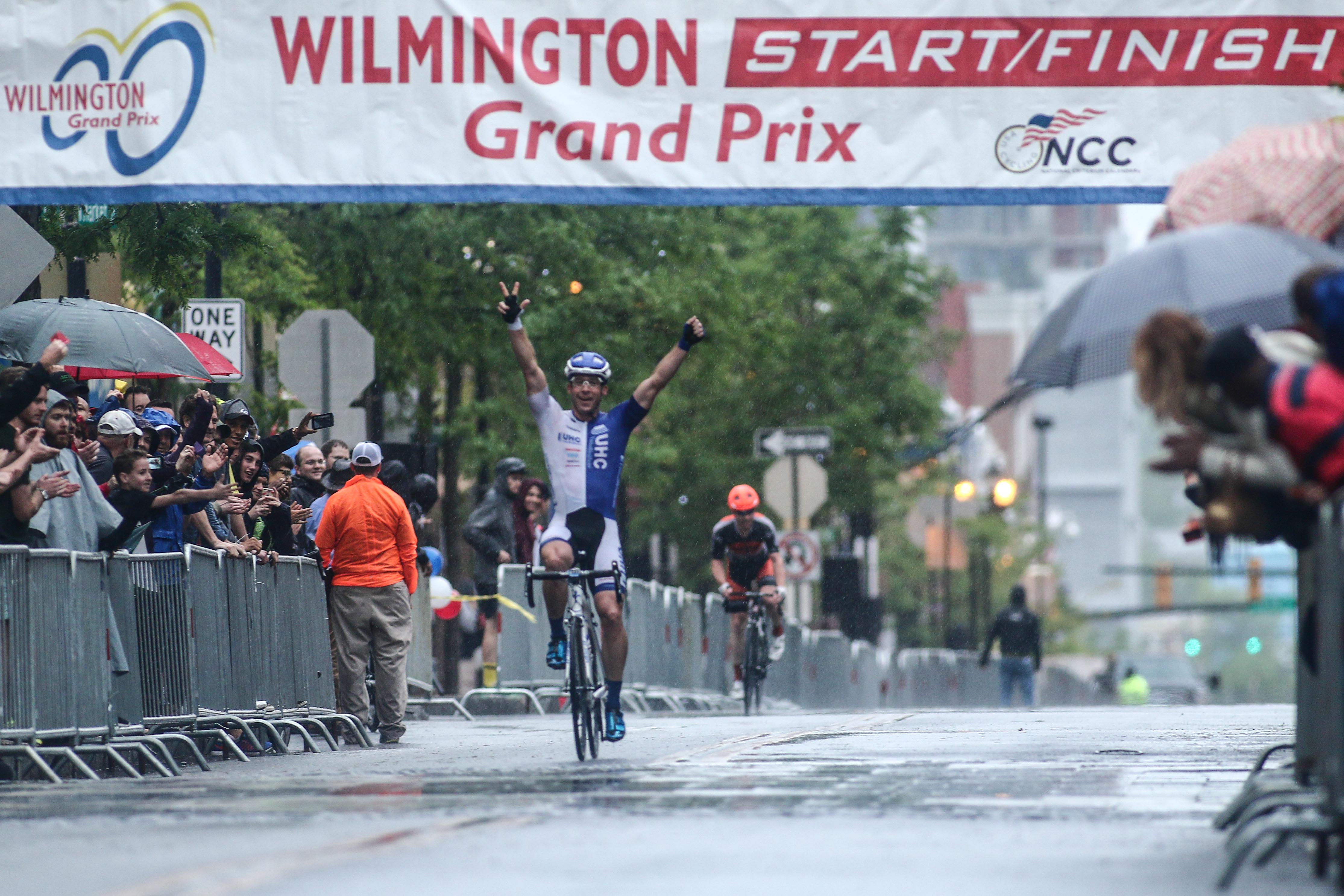 File photo: Brad White of team United Health care Pro Cycling celebrates as he crosses the Finish line in front of the Grand Opera House on Market Street to win the MenÕs Pro & Category I (35 miles) race for the third consecutive time in three years Saturday, May 14, 2016, in Wilmington Delaware. Photo By Saquan Stimpson

“The Wilmington Grand Prix is one of my favorite races,” said two-time women’s winner Tina Pic of Gainesville, Ga. “The course is fast, technical, challenging and ends on a great hill. Last year I was lucky enough to stay and ride the Gran Fondo. What a beautiful and well-supported event. You shouldn’t miss this one, whether you are racing or just there for the Fondo.”

The action starts Friday night (May 17) with the Monkey Hill Time Trial, a 3.2-mile race against the clock through Wilmington’s Brandywine Park. The setting also serves as the Grand Prix Kick-off Party, with live music, food trucks and more complementing the racing, creating a truly unique atmosphere alongside the historic cobblestones of Monkey Hill.

Saturday (May 18) will feature four amateur races in the morning, culminating with the Women’s Pro and Men’s Pro races in the afternoon. In addition to the racing action, the Grand Prix Street Festival returns, offering free family entertainment from 5th Street to 10th Street. Activities include sidewalk sales, course-side cafes and a variety of family games and activities, including moon bounces, bungee jumping, fitness challenges, bike expos and more.

Sunday (May 19) will see the return of the 9th Annual Governor’s Ride and the 8th Annual Delaware Gran Fondo. Last year’s Gran Fondo attracted cyclists from 15 states, including Utah, Alabama, and Colorado, by offering them a scenic tour through the Brandywine Valley and some of Delaware’s best-known attractions.

“The Gran Fondo will not only attract top cyclists, pro and amateur, to ride in Wilmington, but it will showcase the beautiful cultural attractions in the Brandywine Valley,” said Jerry duPhily, event organizer. “The area offers some of the best cycling terrain on the East Coast. Riders can experience the spectacular rolling hills of chateau country. The course will include world-class institutions such as Hagley Museum & Gardens, Winterthur Museum, Garden and Library, and Auburn Heights.

“The Wilmington Grand Prix draws thousands of dedicated fans and spectators to the market,” said Chip Rossi, Bank of America Delaware Market President. “Investing in events like the Grand Prix that drive economic development in the region is part of our mission to help make financial lives better and our communities succeed.”