The Ladybug Music Festival returns to Market Street in Wilmington on Friday, May 20, 2022, with over 40 artists from all over the country celebrating women in music. Starting in 2012, The Ladybug Music Festival features an all-female-led lineup of artists taking over a two-block area of LOMA for an evening of great music. In addition to the music, Ladybug will feature a variety of vendors, food trucks, and alcoholic libations. Admission is FREE and it is a rain or shine event.

Businesses on the 200 block of Market are throwing open their doors to host a variety of talent at this year’s event. Artists hail not only from Wilmington, Philadelphia, and the surrounding area, but as far as New York City, Nashville, Tennessee, and Portland, Oregon. This year’s headliner is the fantastic Sweet Lizzy Project. Founded in Cuba in the mid-2010s, the band defected to the United States in 2017 where they’ve been recording and touring out of their home base in Nashville. Their anthemic modern rock and high-energy performance will be the perfect way to cap off an amazing day of music. Other artists on the bill include The Upstarters, The Infamous HER, Laura Cheadle, Sug Daniels, and many, many more. Founder Gayle Dillman is excited about the diversity in this year’s lineup. “We try to hit on as many genres of music as we can. And I think we pretty much touch on everything,” said Dillman. “In addition to Rock, we have Alternative Indie groups, some Hip-Hop, Folk & Country as well as Singer-Songwriters and Jazz. A little bit of everything” The Ladybug Music Festival takes place May 20, 2022, on the 200 & 300 blocks of Market Street, with an additional stage at Humble Park on 4th & Shipley. Music begins at 5:00 pm and is made possible with the support of Chase Bank, 2nd and LOMA, ShopRite Kenny Family Stores, Downtown Visions, The Office of Economic Development, The City of Wilmington, BPG, Greater Wilmington Visitors Bureau, and Wilmington Alliance. Other sponsors include Out & About, InWilmington, WDEL, Faithful Friends, Bracy & Associates, Lyons Insurance, WhyFly, The Wilmington Whiskey Club, Soundgirls, and Del Tech Community College. FESTIVAL DETAILS:WHEN: Friday, May 20, 2022WHERE: 200 & 300 Blocks of Market St, Wilmington, DETIME: 5:00pm – 10:00pmTICKET INFO: Admission is FREE. 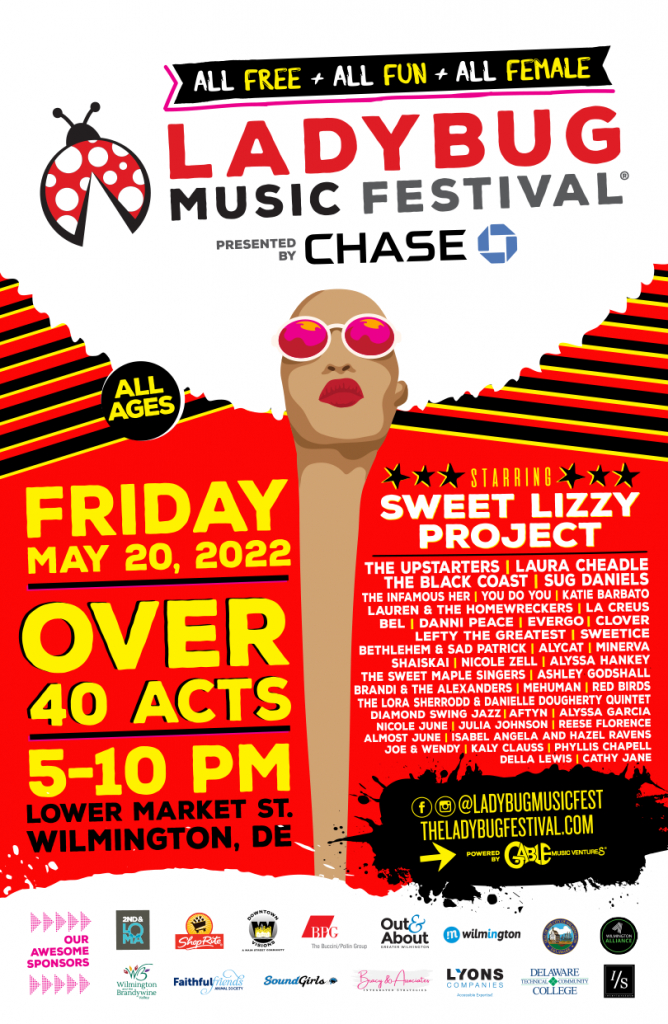