The Delaware Thunder were swept during this weekend’s series against the Motor City Rockers with an impressive 6-3 loss on Saturday night after a 6-3 loss Friday night.

Derek Makimaa scored the first goal of the game for a 1-0 lead 1:14 into the first period. Thirty seconds later, the Rockers added to the lead, 2-0. Brad Reitter offered a one-time pass to Tommy Cardinal who fired in the goal for his fourth of the season.

The Thunder pulled their goalie Michael McHale 1:44 into the first period and went the rest of the way with Trevor Martin between the pipes. 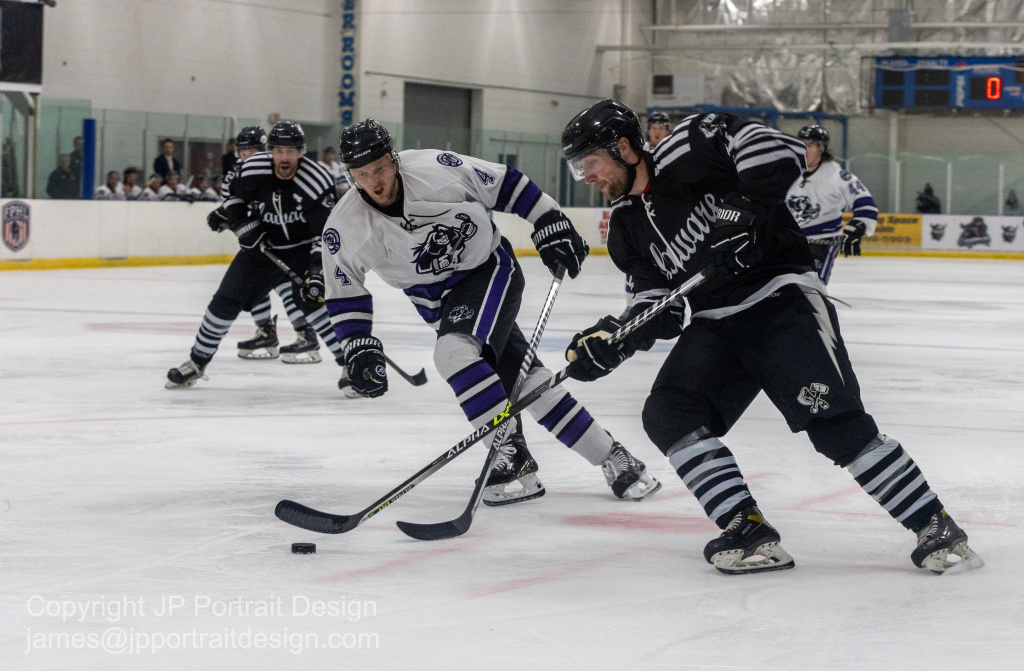 HARRINGTON, Del. – 11/26/22 Forward Ryan Marker #16 of the Delaware Thunder returns for his first game of 2022 after starting the season on suspension due to a contract dispute at the Thunderdome on 11/26/22 in Harrington, Delaware. The Motor City defeated the Thunder 6-3. (Photo by James Pernol, Released)

Delaware was able to claw back into the game in the second period off the stick of captain Alex Soucy who recorded two goals in the span of 55 seconds. Forward Ryan Marker, who returned for his first game out of suspension, carried the puck into the offensive zone and fired a shot at Blake Scott, who made an initial save. As the puck was bobbled, Soucy tipped it in to cut into the Rocker lead, 2-1. The second goal for Soucy was a hard wrister from the far circle for a 2-2 tie that was set up on a quick feed from Pier-Luc Bellard, who settled a Marker pass with his glove and moved into the offensive zone.

The Rockers regained the lead, 3-2, on the power play with 4:37 to play in the second period. Declan Conway scored with an assist from Scott Coash and Cade Lambdin in the offensive zone.

The Rockers continued to find the back of the net in the third period thanks to Cardinal’s second of the game that came off a rebound of a White shot for a 4-2 lead 1:26 into the period. Coash scored quickly with a wrist shot for a 5-2 lead at 3:34 in the third.

The Thunder were able to get another goal to cut into the Rockers’ lead, 5-3, from Chris Corgan with 7:39 to play.

Coash added an empty net goal with 45 seconds left in the contest from 135 feet for a 6-3 lead and his second of the game. The Thunder will host the Binghamton Black Bears on December 9th at the Delaware State Fairgrounds. With the loss, Delaware moves to 1-11-1 and Motor City improves to 9-3-3. https://www.federalhockey.com/home [federalhockey.com]