DOVER, Del. – The National Association of Social Workers (NASW) recently honored Delaware State University alumna and longtime faculty member, Dr. Marlene Saunders, as a “Social Work Pioneer” in recognition of her years of service and contributions in the field.

The NASW recognized Dr. Saunders during Oct. 15 ceremony in Washington, D.C. She is a 1967 graduate of then-Delaware State College, earning a BA in Sociology, and a 30-year faculty member in the University’s Department of Social Work.

In honoring Dr. Saunders, the NASW noted the following:

Marlene Saunders, DSW, MSW, has demonstrated, for more than half a century, a steadfast commitment to the profession of social work. Saunders has dedicated her entire career to advocacy and grassroots community engagement, especially uplifting Black and Brown communities that have historically been and continue today to be impacted by poverty, disenfranchisement, and marginalization. She believes that true, sustainable change cannot happen without the involvement of a community. She thinks that ordinary members of the community are best positioned to identify solutions to solve their own problems if they have the capacity and resources to do so. 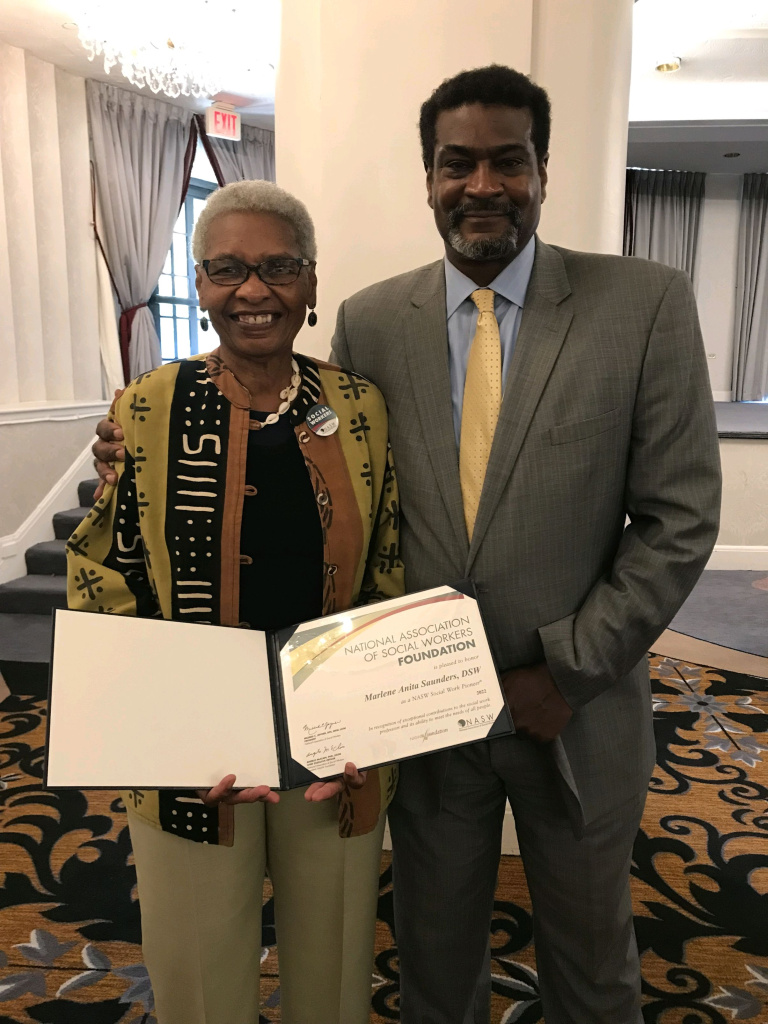 (L-r) Dr. Marlene Saunders, retired DSU Chair of Social Work, stands with Angelo McClain, CEO of the National Association of Social Workers after she was honored by that organization as a “Social Work Pioneer.” Photo courtesy of DSU

It is Saunders’ deeply embedded social values of strengths, empowerment, and resilience that have buttressed her decades of committed community organizing work. She has helped to build the capacity of organizations and communities in the state of Delaware. She has helped them gain access to much-needed resources, whether in the form of grants, salaries, stipends, and programs or through access to HIV/AIDS testing and medicine or COVID testing and vaccines.

For more than 50 years, Saunders has been a diligent and hard-working community social worker. The communities know her, and she knows them. She is quietly known as “The Community Whisperer” throughout the state of Delaware. There is no doubt that the specific contributions Saunders has made to poverty-impacted communities have led to profound positive changes in the lives of those who are disenfranchised and marginalized. More importantly, those changes were not just material or measurable ones: they were positive changes, instilling pride and dignity in the people and communities she has touched.

In addition to her undergraduate degree at Delaware State College, she later earned an MSW and a Doctor of Social Work both from the School of Social Work at the University of Pennsylvania in 1972 and 2001, respectively.

After working as a social work leader in the Greater Philadelphia, Pa. area for 17 years, she began her teaching tenure at Delaware State College in 1985. Throughout her career, she was instrumental in the process of accreditation reaffirmations for both the BSW and MSW programs, in the increase in the enrollment of students in both programs, and in the social work curriculum expansion and field placement assignments.

She retired in 2014 from Delaware State University as the Chair of the Department of Social Work and has remained active since her retirement.

In 2015, Dr. Saunders initiated a partnership between the University, the Delaware Chapter of the NASW (NASW-DE), the State Department of Health and Social Services, and the Delaware Department of Mental Health and Substance Abuse. Also in 2015, she was instrumental in the establishment of multi-tiered licensure in Delaware. Since her retirement, Dr. Saunders has served as the Executive Director of NASW-DE. She has also been politically active in state Democratic Party circles through her involvement in the Sussex County Democratic Committee.

She is currently the vice chair of the Women’s March Sussex – Delaware and the Southern Delaware Alliance for Racial Justice, as well as an elected Commissioner for the Town of Bridgeville, Del., the town of her birthplace.