It’s Robert Freeman Day in the City of Wilmington!  Longtime 6 ABC Photojournalist is Honored Upon His Retirement

Today, June 30, 2022, is Robert Freeman Day in the City of Wilmington. Robert is the longtime 6 ABC Action News photojournalist who is today completing his 43-year career and will retire at the end of the day. Mayor Mike Purzycki, Delaware Lieutenant Governor Bethany Hall-Long, and New Castle County Executive Matt Meyer staged a “news conference” yesterday morning supposedly to make a joint government announcement, but instead held a surprise ceremony to honor Robert, who lives in Delaware, for his years of work which includes filming and videotaping the news history of Wilmington and all of Delaware.

The Mayor declared today Robert Freeman Day during the Thursday ceremony, while the County Executive and Lt. Governor spoke about how important Robert’s work has been to all of Delaware. Robert joined Channel 6 in Philadelphia in 1979 after graduating from Temple University and has been assigned to the Action News Wilmington bureau since the late 1980s. His 43-year tenure in the news business career makes him the second-longest serving photojournalist in the history of WPVI-TV.

Congratulations Robert on an outstanding career and best wishes for an enjoyable retirement! The Mayor’s Proclamation honoring Robert is presented below. An Action News story about yesterday’s ceremony can be viewed here [6abc.com]. 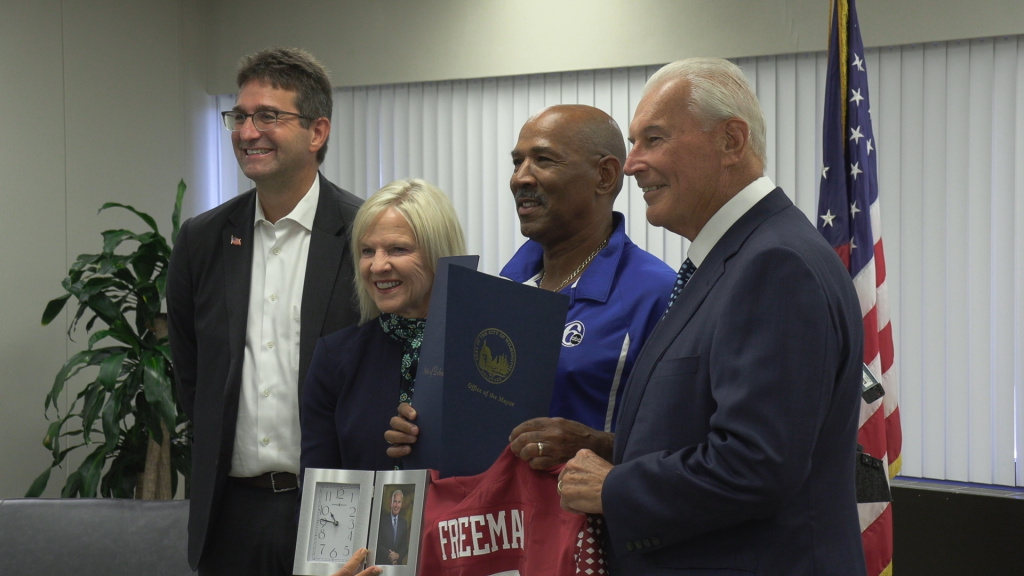 Robert Freeman Day in the City of Wilmington. Photo By Saquan Stimpson shot on Canon XF400

Proclamation from the Office of the Mayor

WHEREAS, the City of Wilmington honors Robert Freeman for an exciting and impactful 43-year career behind the camera at 6 ABC News – the second-longest employed photographer at WPVI-TV, the number one news station in Philadelphia; and

WHEREAS, Robert began his career with Channel 6 in Philadelphia in 1979 after graduating from Temple University, starting off as a courier, moving up to sound technician and, finally, a photojournalist assigned to the Wilmington, Delaware bureau in the late 1980s; and

WHEREAS, Robert has adapted to rapidly changing technology during his four decades in the industry – from film cameras and sound technicians to microwave trucks to the current P2 video cards and cellular video transfer; and

WHEREAS, Robert Freeman has traveled the length and breadth of the First State covering all manner of stories – from deadly beach storms to major court cases to routine ribbon cuttings, ground-breaking ceremonies, and news conferences too numerous to count – in addition to all of Philadelphia’s pro sports teams and national events like the Exxon Valdez oil spill in Alaska and traveling to Germany embedded with the United States Air Force; and

WHEREAS, during his long tenure, Robert has covered five Wilmington mayors, eight New Castle County Executives, and six Delaware governors, among other elected and community representatives, and also covered Joe Biden from his days as a U.S. Senator, through eight years as Vice President, and into the White House as President of the United States; and

WHEREAS, Robert Freeman, who talks easily with anyone and everyone, has never met a stranger who didn’t quickly become a friend, and is known for treating everyone he encounters with kindness and respect, making him a much-beloved member of the community that he has long served.

NOW, THEREFORE, I, Michael S. Purzycki, Mayor of the City of Wilmington, do hereby proclaim that Thursday, June 30, 2022, is declared

and on behalf of all Wilmingtonians express our sincere thanks and appreciation to Robert for his decades of dedication and hard work telling the many stories of our beloved City and State and extend best wishes upon his retirement.