President Biden previously represented the state of Delaware for 36 years in the U.S. Senate.

Due to COVID restrictions in place at the time, there was no traditional commissioning ceremony held when USS Delaware was commissioned administratively on April 4, 2020. On that day, the submarine was underway and became the first U.S. Navy ship commissioned while submerged.

Saturday’s ceremony followed the script of traditional commissioning in every way and was held in commemoration of the milestone. 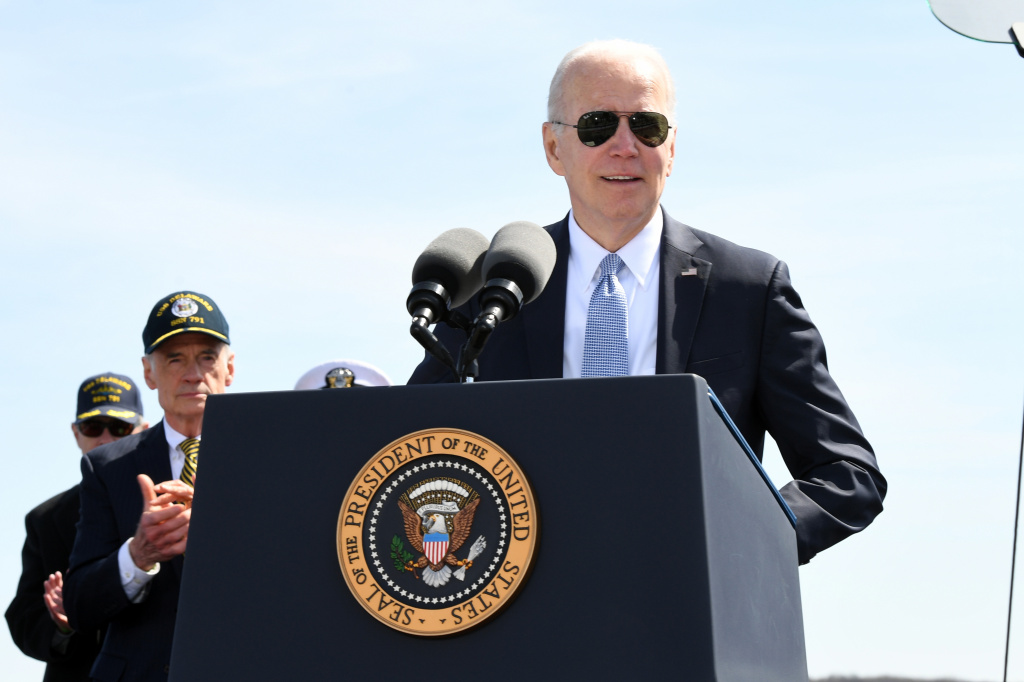 220402-N-GR655-0586 WILMINGTON, Delaware (April 2, 2022) – President of the United States Joe Biden delivers remarks during a commissioning commemoration ceremony for the Virginia-class submarine USS Delaware (SSN 791) in Wilmington, Delaware April 2, 2022. The initial commissioning took place administratively in April 2020 due to COVID restrictions at the time and is the first submarine to be commissioned while submerged. Delaware, the seventh U.S Navy ship and first submarine named after the first U.S. state of Delaware is a flexible, multi-mission platform designed to carry out the seven core competencies of the submarine force: anti-submarine warfare; anti-surface warfare; delivery of special operations forces; strike warfare; irregular warfare; intelligence, surveillance and reconnaissance; and mine warfare. (U.S. Navy photo by Chief Petty Officer Joshua Karsten)

“This latest Navy ship to carry the Delaware name is part of a long tradition of serving our nation proudly and strengthening our nation’s security,” President Biden said. “Not just us, but our allies and partners around the world as well.”

As the ship sponsor, Dr. Jill Biden performed the traditional honor of calling for the crew to man the ship and “bring her to life,” a ceremonial procession following the commemorative setting of the first watch.

“This vessel will always uphold the First State’s motto of ‘Liberty and Independence,’” she said. “It’s difficult to put into words what it means to be a part of the USS Delaware family. It’s an incredible honor that I take seriously. I’ve seen the heart of this crew and it makes me proud and humbled to be your shipmate for life.”

“The men who serve — and will serve — aboard the USS Delaware will bear our state’s name for decades to come as they defend our nation,” said U.S. Sen. Tom Carper of Delaware, the event’s keynote speaker. “Through their sacrifice and service, may we grow ever closer to that more perfect union.”

USS Delaware is homeported at Submarine Base New London in Groton, Connecticut, where it operates under Submarine Squadron 12 and its Commodore, Capt. Matthew Boland.

“The Sailors who power our undersea fleet are an elite breed,” Secretary of the Navy Carlos Del Toro told those in attendance Saturday. “They’re skilled, they’re disciplined and they’re determined. They make enormous sacrifices, achieving amazing things over the horizon and under the waves.”

The submarine is the seventh U.S. Navy ship to be named for the First State, but the first in more than a century. The first ship to be named Delaware was a 24-gun frigate launched in July of 1776, the month the Continental Congress adopted the Declaration of Independence.

The most recent previous ship to bear the name was a battleship commissioned in 1910 and in service in the Atlantic during World War I.

Cmdr. Matthew Horton, commanding officer of SSN 791, told Saturday’s attendees his submarine followed in the proud wake of the battleship Delaware, which also visited the Port of Wilmington 112 years ago to celebrate her commissioning.

“This week we had the pleasure of sailing through the beautiful Delaware Bay and River, past Fort Delaware, and continuing the tradition of Delaware warships calling on their namesake and presenting our fine warship to the First State,” he said.

“USS Delaware stands before you as the ideal ship,” Horton continued. “Limitless in range; unmatched in power, precision, and stealth. Her engineering renders her nearly undetectable; her sensors reveal the presence of any foes. Capable of dominating across the spectrum of warfare, she excels in all her assigned missions. From the depths of the ocean, ensuring sea control, to delivering precision strikes and supporting naval special warfare.”