Jenkins owns eight years of Division I coaching experience and most recently spent the past year serving as an assistant coach at Penn State. Delaware Athletics officially welcomed Jenkins at a press conference on Tuesday, April 5 at the Bob Carpenter Center.

“We are excited to welcome Sarah Jenkins back to the University of Delaware,” said President Dennis Assanis. “Her history of excellence and success as an associate head coach has prepared her for this moment to lead the Blue Hens. I am confident she will be an outstanding leader of our women’s basketball program and an exceptional ambassador for the university.” 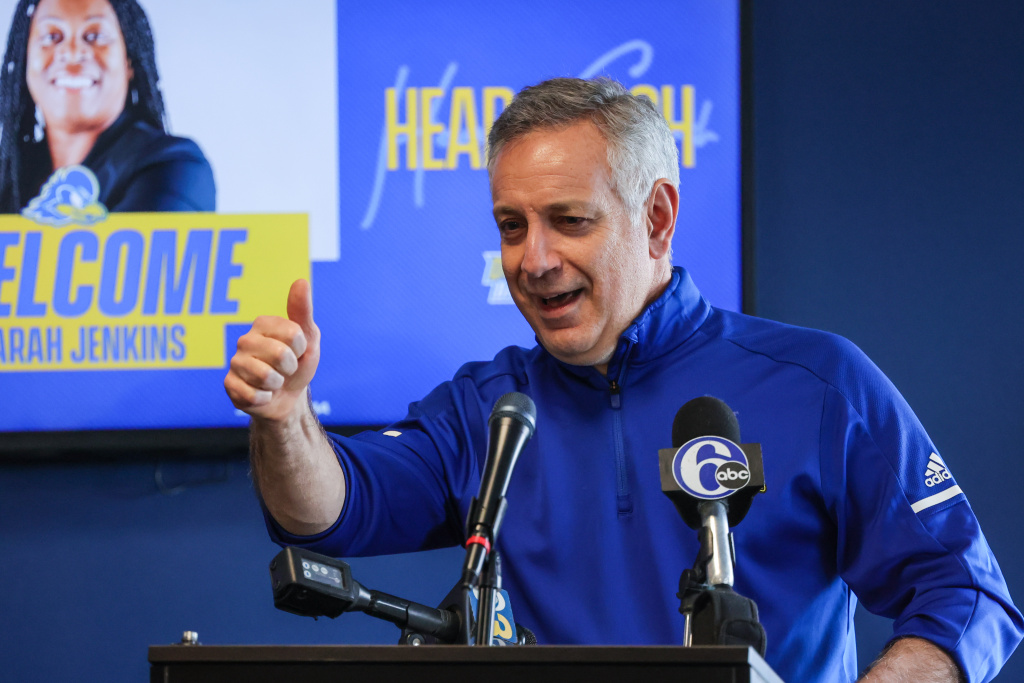 Jenkins is no stranger to the Blue Hen family as she spent four seasons on the coaching staff. She held the title of assistant coach and recruiting coordinator (2017-20) before being elevated to associate head coach and recruiting coordinator during the 2020-21 season. During her tutelage, the Blue Hens were 71-50 overall and 46-26 in conference play. 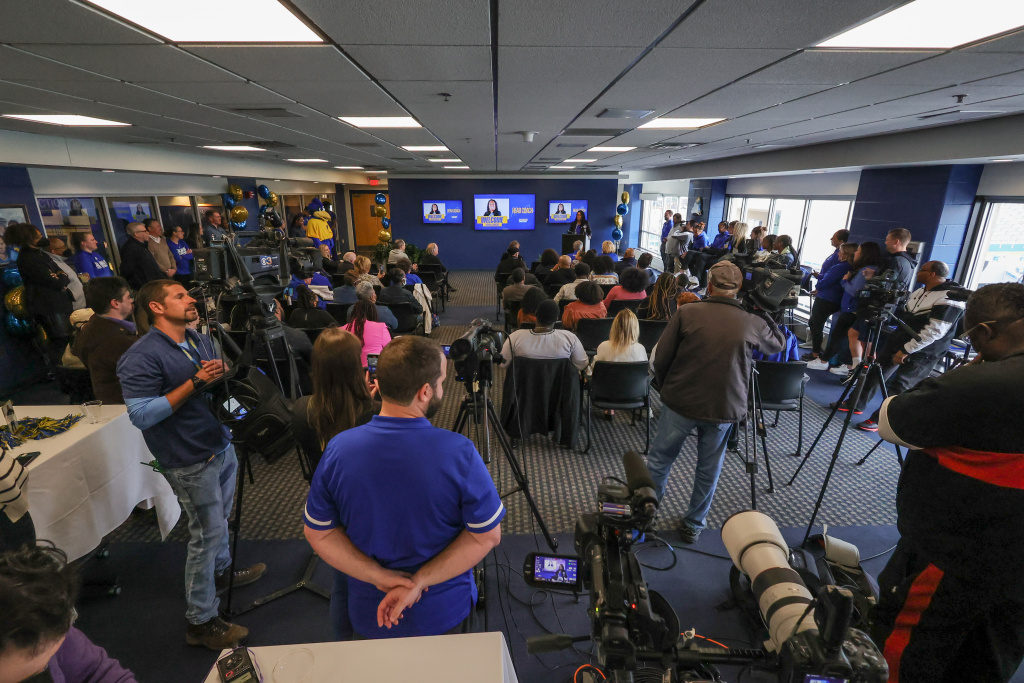 “I could not be more excited to have Sarah return to Delaware as the head coach of our women’s basketball program,” said Rawak. “She embodies our core values and believes in our mission. Sarah brings excellent experience and a commitment to developing young women on and off the court, a passion for the game of basketball, and knows how to win. I know we have found the right person to build upon our success on and off the court and I can not wait to partner with her to achieve that success!” 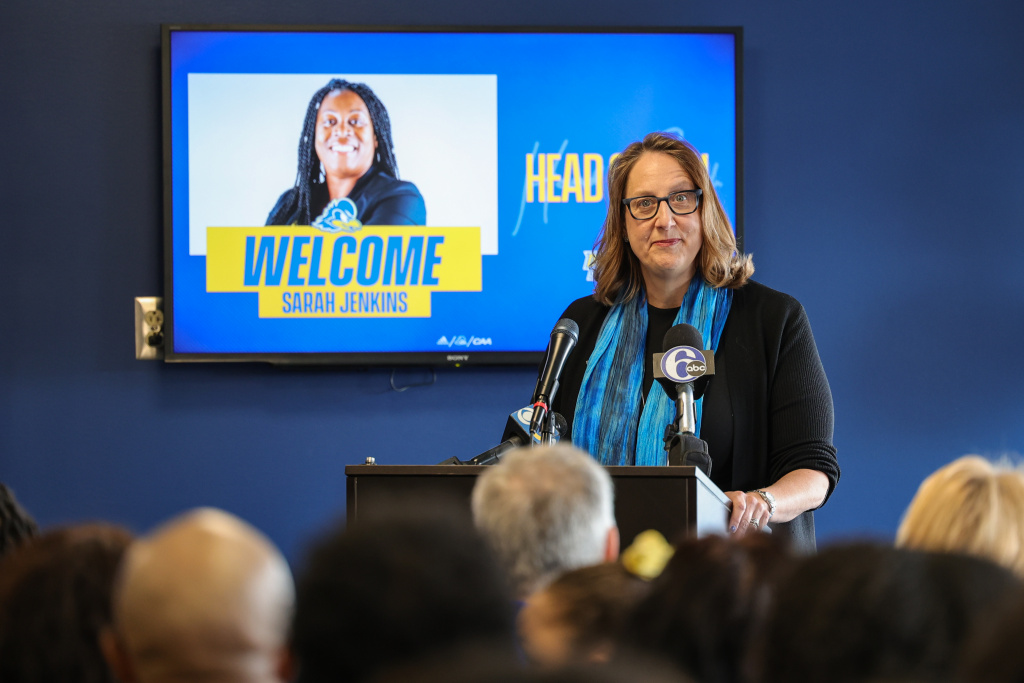 In her final year in Newark, Jenkins played an intricate role in guiding Delaware to one of its best seasons in nearly a decade in 2020-21. She helped guide the squad to a Colonial Athletic Association (CAA) regular-season title, WNIT Charlotte Region Championship, and a WNIT semifinals appearance; posting a 24-5 overall record, including a 16-2 mark in conference play to conclude the year. Jenkins helped develop a spectacular season from CAA Player of the Year, first-team all-conference, all-defensive team, and all-tournament team selection Jasmine Dickey, who became the sixth player in program history to earn player of the year honors. The team finished the season as the NCAA Division I statistical champion in offensive rebounds per game (20.3). Jenkins was primarily tasked to work with the perimeter players where she helped develop two CAA Player of the Year honorees in Dickey and Nicole Enabosi along with a multitude of All-Conference selections. 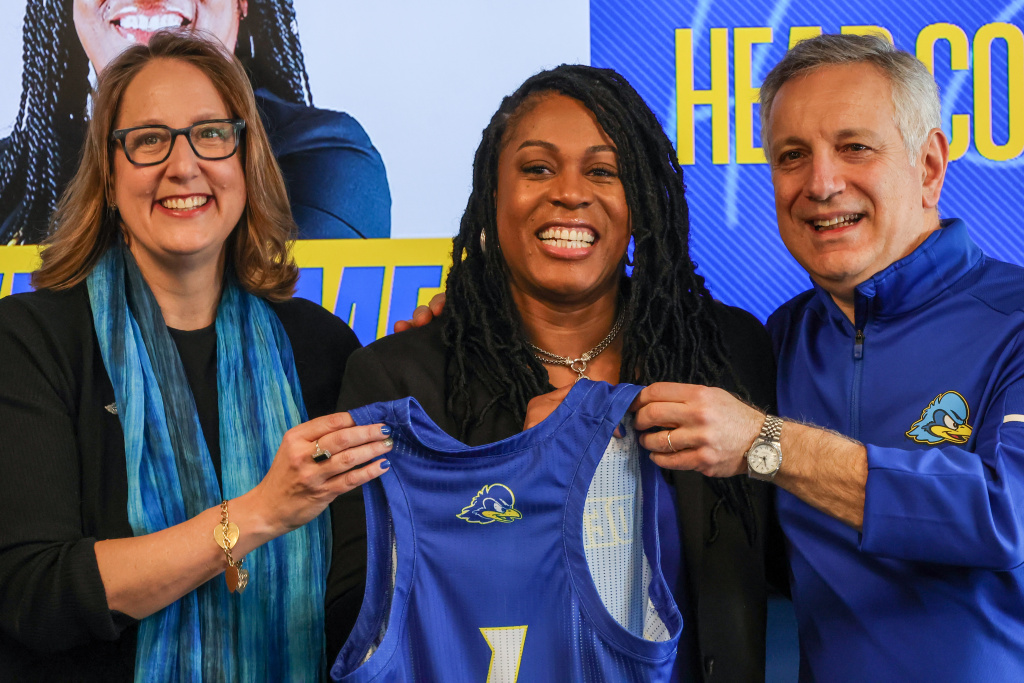 “To come back to Delaware and lead the women’s basketball program is an exciting moment,” said Jenkins. “I am beyond thrilled to return to Delaware and take over as the head coach of one of the top programs not only in the Colonial Athletic Association but the region. I want to thank University President Dennis Assanis, Director of Intercollegiate Athletics and Recreation Chrissi Rawak, and Deputy Athletic Director Jen Vining-Smith for the trust they have placed in me. I am excited to build upon the championship culture that has been established and can’t wait to get started.”

Before Delaware, Jenkins spent three seasons (2014-17) as an assistant coach at her alma mater, Georgetown. She helped guide the Hoyas to back-to-back WNIT appearances (2016-17) while developing a pair of All-BIG EAST selections, including BIG EAST Freshman of the Year Dorothy Adomako.

Jenkins spent more than eight years in the high school coaching ranks prior to her returning to Georgetown in 2014. She made stops at The Geneva School (Fla.) and Winter Park High School (Fla.) where she led her squads to a pair of district championships as well as two regional final appearances.

The Bowie, Md. native started her collegiate playing career at the University of Maryland but transferred to Georgetown where she played four years of basketball. As a student-athlete, Jenkins was a BIG EAST Academic All-Star and served as a two-year team captain. Jenkins graduated with bachelor’s degrees in English and Sociology in 2005.