A new study from the Institute on Taxation and Economic Policy on Sen. Rick Scott’s “Skin in the Game” tax proposal has found that the proposal would increase taxes by more than $1000 on average for Americans in the bottom 40 percent of the income distribution. The proposal would also increase taxes for the middle class, driving an increase of $500 on average for the middle 20%, while leaving the tax rate for the top 1% of earners unaffected. The majority of the overall funds raised by the tax increase would be paid for by the lowest-income Americans, with the bottom 40% of earners contributing 79% of the tax increase.The analysis follows a report  [whitehouse.us19.list-manage.com]by the Tax Policy Center that similarly found the impacts of the tax increase would disproportionately fall upon lower and middle-income Americans.

Institute on Taxation and Economic Policy: “State-by-State Estimates of Sen. Rick Scott’s “Skin in the Game” Proposal” [whitehouse.us19.list-manage.com][3/7/22]A recent suggestion from Sen. Rick Scott, the chairman of the National Republican Senatorial Committee (NRSC), to require all Americans to pay federal personal income taxes would increase taxes by more than $1,000 on average for the poorest 40 percent of Americans. The share of households facing tax increases would vary across states, from a low of about 24 percent in Washington State to a high of about 50 percent in Mississippi.The states most affected, where more than 40 percent of residents would face tax increases, are located mostly in the south: Mississippi, West Virginia, Arkansas, Louisiana, Alabama, Kentucky, Oklahoma, Georgia, New Mexico, South Carolina, and Sen. Scott’s home state of Florida. 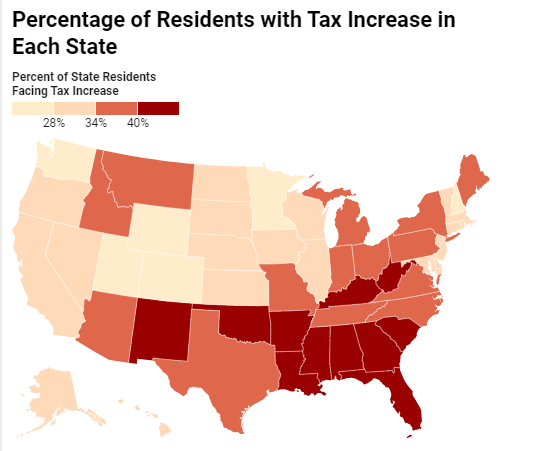 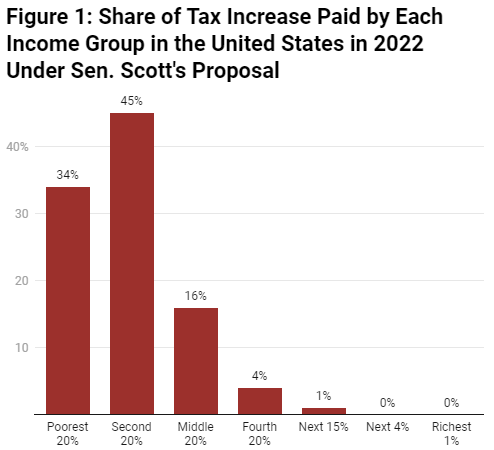 These refundable tax credits are one feature of the federal personal income tax that makes it progressive. But Americans, including those who benefit from these tax credits, pay many other taxes that are not progressive, such as the federal payroll tax and state and local taxes, particularly property taxes and sales taxes. (ITEP has demonstrated in previous analyses that America’s tax system overall, including all the taxes that Americans pay, is not very progressive.)

Table 1: Impacts of Requiring Minimum Federal Personal Income Tax Liability of $1 in 2022 in the United States 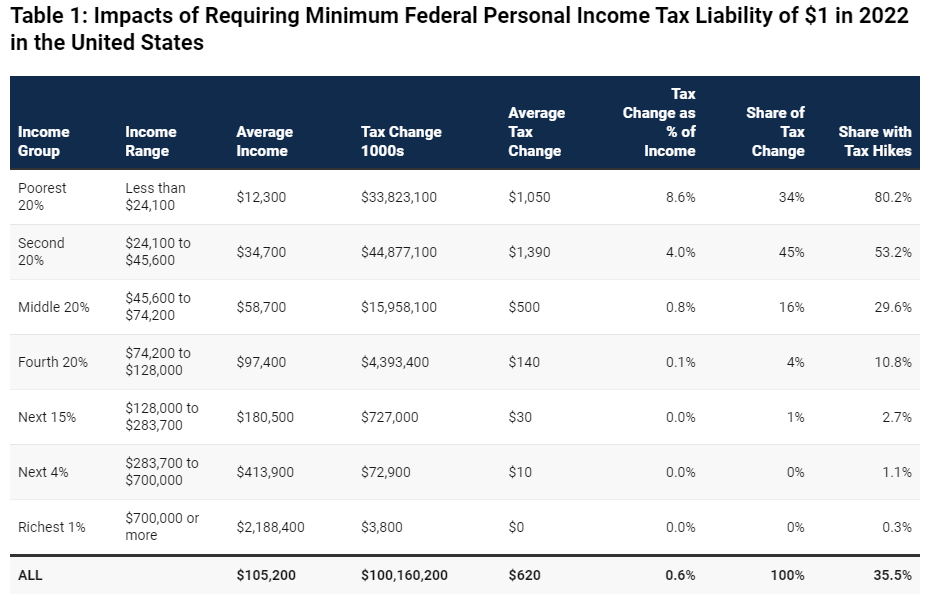 For example, Table 1 illustrates that the poorest fifth of Americans would pay 34 percent of the total tax increase under the proposal, and the average tax hike for this group would be around $1,000. This would happen because the average federal personal income tax liability for this group under current law will be around negative $1,000 due to the EITC and the Child Tax Credit. (This figure varies depending on the number of children and the amount of earnings a household has.) As explained below, the only possible interpretation of Sen. Scott’s proposal is that it would wipe out significant benefits that low- and moderate-income Americans currently receive from these tax credits.

More Details on Sen. Scott’s ProposalSen. Scott’s suggestion that everyone should have positive federal income tax liability was released in February as part of a proposed agenda for a possible future Republican Congress. The importance of this tax proposal might be overlooked given that it is expressed in just 27 words:“All Americans should pay some income tax to have skin in the game, even if a small amount. Currently over half of Americans pay no income tax.”It is true that some people do not pay federal personal income tax, although Scott’s claim that “over half of Americans” fall into this category was only true in the unusual pandemic years of 2020 and 2021.Some people do not pay federal income taxes simply because their incomes are very low. For example, the standard deduction for married couples in 2022 is $25,900, which means any couple making less than this amount owes no income tax.Retirees and people with disabilities sometimes owe no income tax because most Social Security benefits are exempt from the tax.Low-income working people receive the EITC and people with children sometimes receive the Child Tax Credit, and both are refundable tax credits. When a tax credit is refundable it means a household can claim the credit even if it exceeds the tax liability the households would otherwise have.For example, if a household would have income tax liability of $1,000 before considering credits and receives a refundable credit of $1,500, the result is a negative income tax liability of $500, meaning the household receives $500 from the IRS. This money can help offset the other regressive taxes paid by the household (like federal payroll taxes and state and local taxes) and can help families make ends meet at times when their incomes are low. (Research shows that many recipients of the EITC earn more later in life and have positive income tax liability.)[4] The household in this example would lose the $500 check from the IRS under Sen. Scott’s proposal, which would increase their federal income tax liability from negative $500 to positive $1.Effects of Sen. Scott’s Proposal Would Vary Across StatesAs explained at the outset, the states with the highest share of residents facing a tax increase under Sen. Scott’s plan (the states where more than 40 percent of residents would face a tax increase) are predominantly southern states.Table 2 lists each state in alphabetical order along with the share of state residents who would face a tax increase under the proposal. Table 3 presents the same information but ranks the states from those with the highest percentage facing a tax increase to those with the lowest percentage. 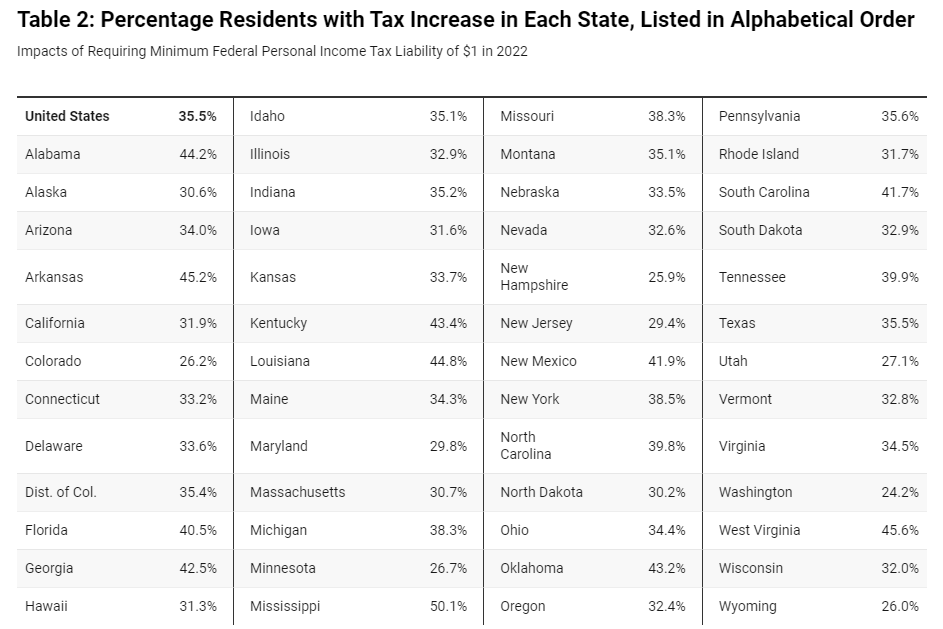 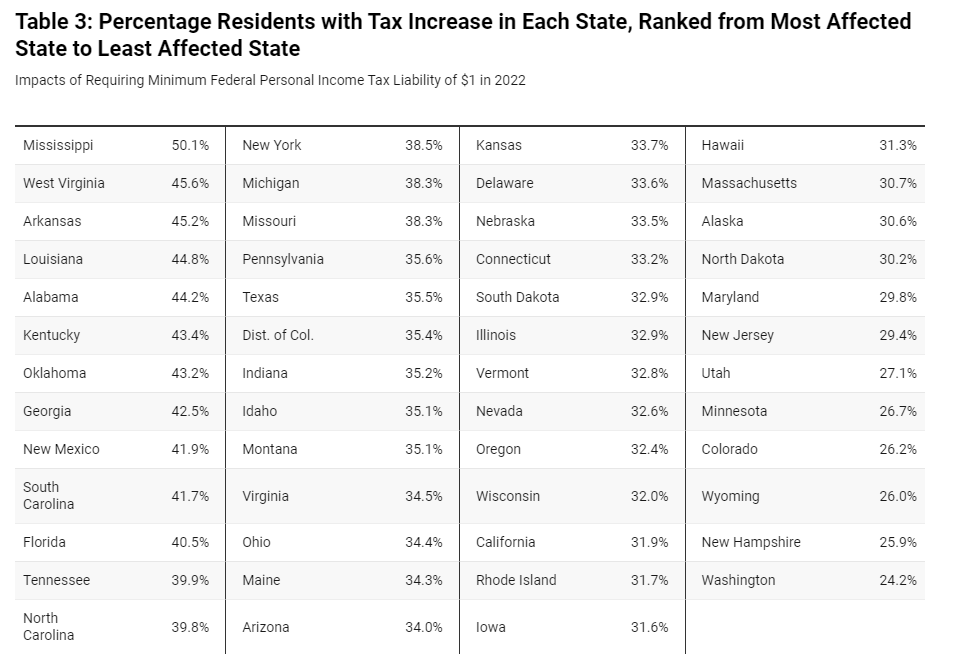 More detailed state-by-state estimates can be downloaded from the link at the top of this report.