WILMINGTON, DE – January 19, 2022 – Joined by City of Wilmington Mayor Mike Purzycki, Wilmington-based developer The Buccini/Pollin Group, Inc . (BPG), BPGS Construction, and ResideBPG celebrated the topping out of their latest residential development Crosby Hill this morning. During the ceremony, a structural beam was raised to the roof of the 11-story building, signifying a major milestone in the development of the 203-unit multi-family community coming to 517 Shipley Street in the Fall of 2022.

Following remarks from Mayor Purzycki, Rob Buccini, Co-President of The Buccini/Pollin Group, and Chris Langan, Residential Regional Director for The Buccini/Pollin Group, guests, neighbors, and project partners were invited to sign the beam prior to its raising by the 150 foot-tall crane that’s been a focal point of the City skyline for the past eight months. The development, which is nearly halfway complete, brings over 200 construction jobs to the City of Wilmington throughout the project. 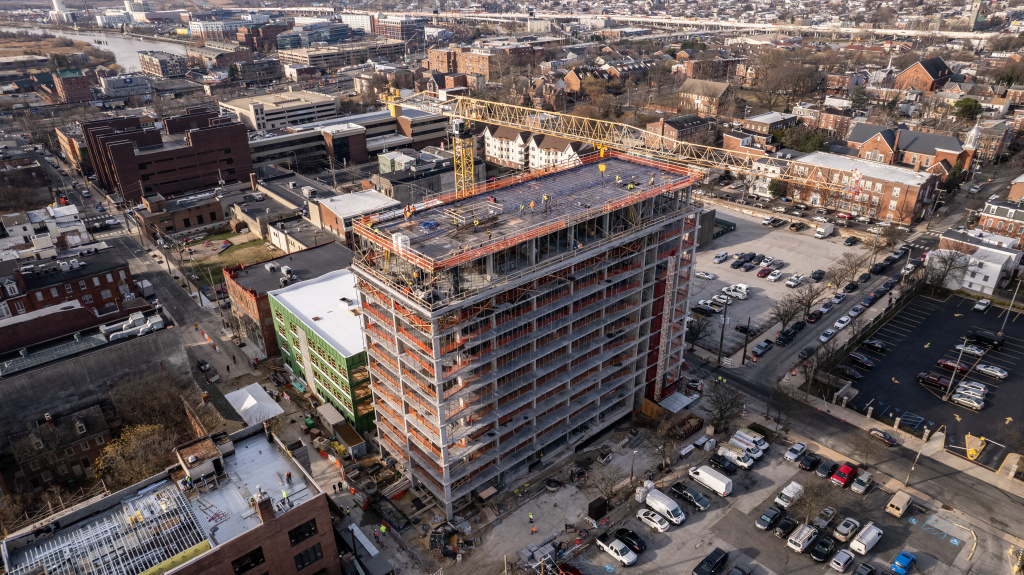 Designed by Niles Bolton Associates, the $62 million development includes two 4-story buildings and one 11-story building surrounding a private, landscaped courtyard with a swimming pool, fireplace, BBQ grills, screening area, and pergola. A private parking garage with 124 parking spots will be located underground for residents. The building will also feature a fitness center and a penthouse clubroom on the 11th floor with unparalleled city and river views. The clubroom will boast a demonstration kitchen, game room, coworking space, indoor fireplace, and outdoor terrace. The community will include studios, one, and two-bedroom apartments with stainless-steel appliances, quartz counter tops and high-end finish details throughout.

The name Crosby Hill pays tribute to the Crosby and Hill Department Store that prominently served Wilmington for nearly a century from 1878 to 1960 at 605 Market St. Described by the Every Evening in 1888 as “an indication of the substantial development of the retail trade in Wilmington…[and] an ornament to the lead business center of the city,” BPG believes this new development will be just as influential for the City as the first Crosby and Hill building.

While the majority of development in recent years has been concentrated to Market Street, Crosby Hill marks a significant move westward to widen the core of the Central Business District in Downtown Wilmington. Prior to demolition, the site was originally a standard parking lot. Crosby Hill will relocate the parking underground and bring an estimated 350 people to Shipley Street, which impacts the broader strategy to build critical mass and broaden the Downtown.

To date, BPG has brought over 2,100 units to the residential market in Wilmington and has no plans of stopping. Even with the addition of 300 new units to Downtown Wilmington last year, BPG’s residential portfolio remains stabilized across the board at 95% occupancy with consistent leasing activity at our newest communities The Cooper and 101 dupont place, which are both over 80% occupied. 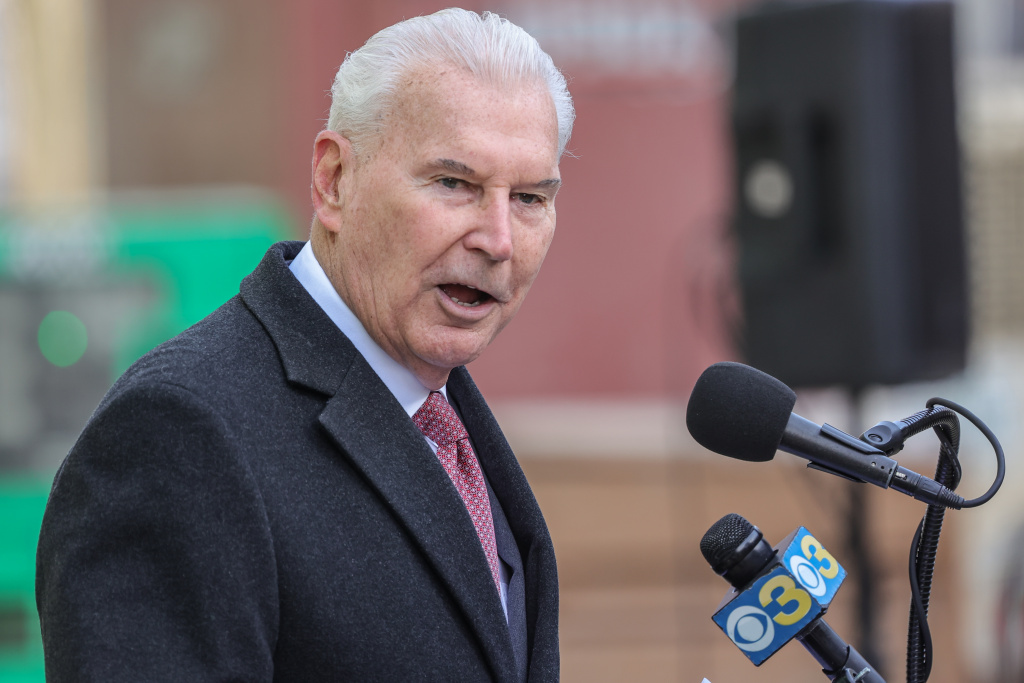 “I’ve often said that if a City doesn’t continue to grow, it will die,” said Mayor Mike Purzycki. “And rest assured, Wilmington is indeed growing, attracting new businesses and – equally important – new residents every day. Crosby Hill is just the latest example of quality housing options, which have expanded significantly in recent years, here in the thriving heart of our great City. This is thanks in no small part to our partners at BPG, whose unprecedented investment continues to show their deep affection and support for Wilmington.” 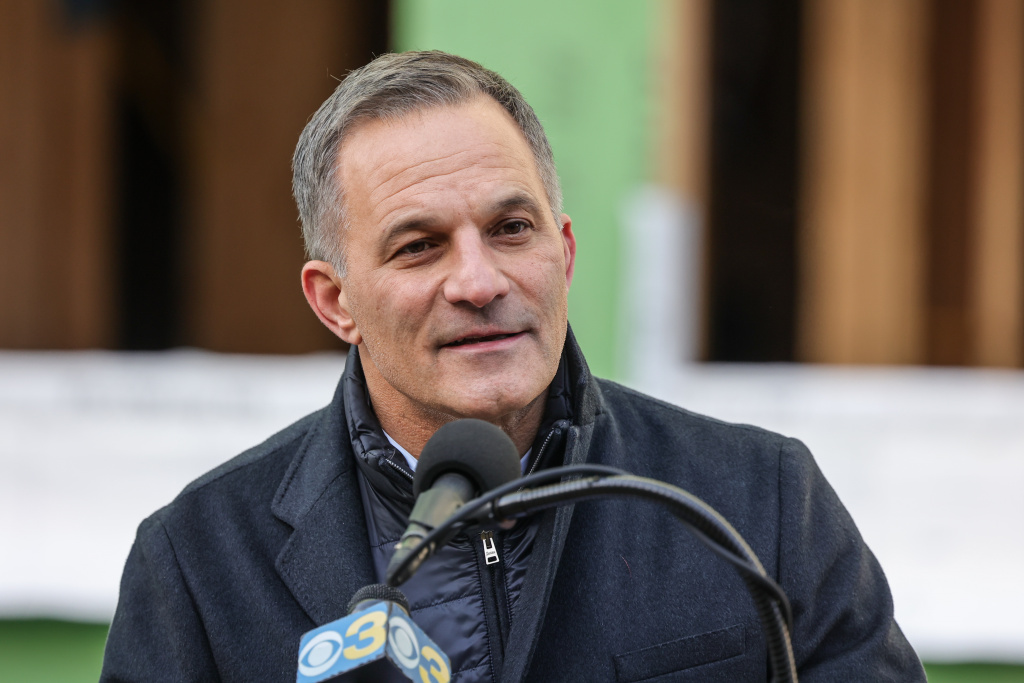 Wilmington-based developer, Rob Buccini of The Buccini/Pollin Group, Inc., gives remarks during the celebration of the topping out of Crosby Hill, their latest residential development Wednesday, Jan. 19, 2022, at 517 Shipley Street in Wilmington, DE. Photo Saquan Stimpson

As more people look to move to Wilmington, BPG recognizes the need to not only deliver luxury living accommodations but also the lifestyle options necessary to attract and retain young professionals. Just before the holidays, BPG opened the doors to Wilma’s Restaurant and Duckpin Bowling Alley at 900 N. Market Street and announced its plans to bring a stand-up shuffle board club Shuffle Libre to The Residences at Mid-town Parks. Other recent investments include the highly-anticipated Bardea Steak and the rooftop bar coming to the boutique hotel at 519 Market Street.

“The amount of construction going on here almost totals $100 million when you include the adjacent boutique hotel just behind us. When you come back in a year and everything is complete at the apartment community, the hotel, and Bardea Steak, it really will be a transformational area of Downtown Wilmington,” said Rob Buccini. “Thank you to our incredible partners without whom this topping out would not be possible, especially Bank OZK, Niles Bolton Associates, the City of Wilmington, BPGS Construction, and ResideBPG.”