DOVER, Del. – Gov. John Carney celebrated the anniversary of the landmark Inspire Scholarship at Delaware State University on Wednesday by signing and enacting Senate Bill 85, which will help students complete their degrees debt-free and enter the workforce prepared for good-paying careers in high demand throughout Delaware and the region.

“The Inspire Scholarship has attracted many high-achieving high school graduates to Delaware State University over the past decade,” Governor John Carney said. “Thank you to the higher education community and members of the General Assembly who continue to advocate for this important scholarship that encourages students to stay and succeed in Delaware after graduation.”

Del State President Tony Allen noted that the signing of the full-tuition INSPIRE Scholarship is the perfect example of what is known as “the Power of We” at Delaware State University.

“The road leading here has involved two governors, three University presidents, far-sighted legislators like Stephanie Bolden, Trey Paradee, and their predecessors like Brian Bushweller and Darryl Scott,” Dr. Allen said. “But today we’ve come together to say that virtually any college-bound Delaware high school graduate has access to a tuition-free college education at the nation’s most diverse, contemporary HBCU. Our prior INSPIRE Scholars have already contributed over 175,000 hours of public service, and we know that more than 70% of them remain in Delaware to start careers and families. This is the ultimate example of working continuously toward a win-win outcome.”

Since its creation in 2010, the Inspire Scholarship has helped more than 2,500 students attend Delaware State University. More than 60% of those scholarships have gone to Black students and 65% have gone to women. Nearly half of Inspire scholarships have been awarded to graduates of Kent County high schools, which has both the smallest population of Delaware’s three counties and the lowest bachelor’s degree attainment rate.

Students who have benefitted the most from the Inspire Scholarship include graduates of Dover High (348 students), Caesar Rodney High (221 students), Polytech High (187), Smyrna High (179) and Lake Forest High (113).

“I strongly believe that a young person’s potential should not be limited by their financial circumstances,” said Sen. Paradee, D-Dover. “The expansion of the Inspire Scholarship is a critical investment in the lives of young people who have proven that they have the drive and ability to be successful at the college level. In the decades to come, our state will be richly rewarded as these young people enter our workforce and strengthen our communities. I am so proud to join Dr. Tony Allen and the entire DSU community as we take DSU to the next level. Hornets Rising!” 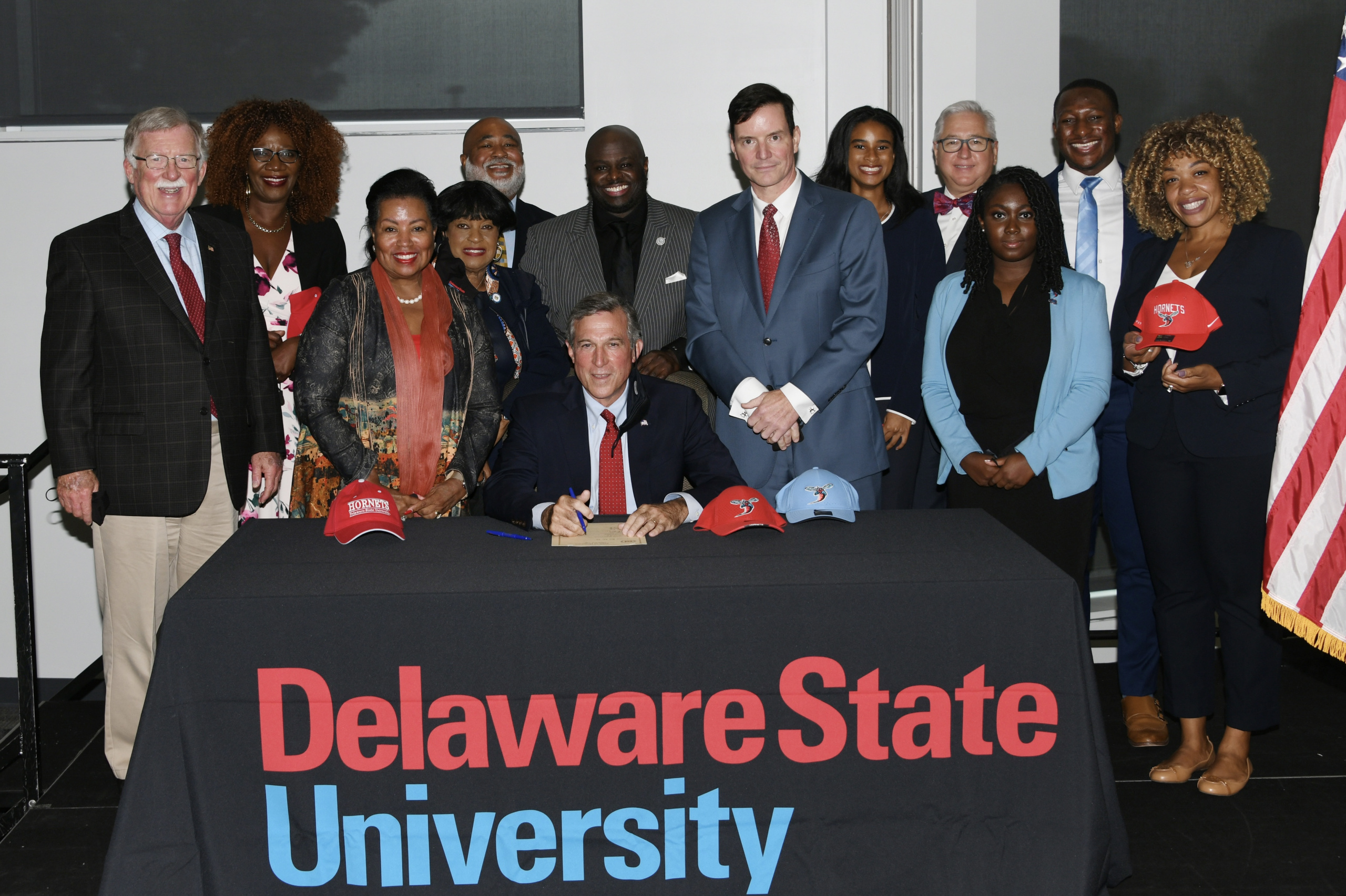 The Oct. 6 bill signing also served as an anniversary celebration of the Inspire Scholarship, which was signed into law at Delaware State University’s campus almost exactly 11 years earlier. Initial funding for in-state students attending Delaware State University that fall was provided through federal American Recovery & Reinvestment Act, while the first state-funded Inspire grants were not awarded until 2011.

Former Rep. Darryl Scott, former Sen. Brian Bushweller and former Sen. Nancy Cook – the chief architects of the original legislation that created the Inspire Scholarship – were all on hand at Wednesday’s bill signing for Senate Bill 95.

“I cannot name a more rewarding experience from my service in the General Assembly than watching Inspire Scholars receive their college degree and wanting to believe I played even a small part in providing that opportunity,” said former Rep. Scott. “This bill will change lives in a real and meaningful way for not only the recipient, but for their families and generations to follow.”

“INSPIRE has already been critical to the success of so many Delaware students since its original creation in 2010 by offering financial stability and the chance at a world-class education without being buried in debt,” said Dr. Devona Williams, Chairwoman of the Board of Trustees. “What’s happening today is that opportunity is now being expanded to cover full tuition for all four years, and that’s a groundbreaking opportunity almost completely unique to Delaware.”

Under the original program, Inspire Scholarships were capped at an amount equal to a SEED (Student Excellence Equals Degree) scholarship available to Delaware high school graduates pursuing an associate degree at the University of Delaware or Delaware Technical Community College.

The average annual SEED award is currently about $3,600, while the in-state tuition rate for Delaware State University is $7,038. Like SEED, Inspire is a last-dollar scholarship, meaning state funding is only available to fill the gaps between federal aid and the full cost of tuition. However, due to the limitations place on the Inspire Scholarship, students facing financial hardship sometimes were not able to complete their four-year degree when the Inspire Scholarship funding ran out.