Wilmington Mayor Mike Purzycki, who led the Riverfront Development Corporation (RDC) for 20 years during which time the west side of the Christina River was developed, participated with pride today as the current RDC leadership announced that the east side of the river will be developed beginning this summer. The City is pleased to share today’s RDC announcement.

Today, Riverfront Development Corporation (RDC) publicly unveiled comprehensive plans for Riverfront East, an 86.3-acre development of mixed-use opportunity, representing the next major land and economic development initiative along the Christina River in Wilmington. Much like RDC’s work along the west side of the river, the $100 million Riverfront East project will breathe life back into spaces that have long sat idle and develop their potential to elevate quality of life and opportunity for the region. Residents and visitors of Riverfront East will enjoy a diverse offering of resources and services that support their desire to live, work and play to the fullest.

The first phase in the eastward expansion will begin this summer; it is expected to cost $30 million and generate approximately 179 new job construction opportunities. This phase includes public infrastructure projects to make everything more accessible and safer for auto, pedestrian and bike traffic, as well as mass transit. Construction will include stormwater management, roadways and parking areas, a Riverwalk, and a central green. RDC anticipates finishing phase one by the end of 2023.

RDC has acquired key parcels needed for the project and is near completion of bringing the land up to environmental standards for business and residential development. The organization will soon start vetting potential developers, with the goal of ultimately allotting 1.9 million square feet for office space, 357,000 square feet for retail, and 4.7 million square feet for 4,291 residential units when the project is complete. In addition to the City of Wilmington, State of Delaware and the Delaware Department of Transportation (DelDOT), several respected entities—including , Buccini/Pollin Group, Cedar Realty Trust, and BrightFields, Inc.—have partnered with RDC to help make Riverfront East a success. The Riverfront East design team was led by Robert A.M. Stern Architects, Meghan L. McDermott, Partner; Land Collective, David Rubin, Principal; and RK&K Engineers, Robert Shaffer, Design Manager.

“From the moment we put the wheels in motion in 2016, every element in the planning and development of Riverfront East has focused on ensuring its opportunities and experiences are valuable and accessible to all,” said Megan McGlinchey, RDC’s executive director. “We’re excited to move full speed ahead on this mission—one engineered to empower personal and economic growth, fulfillment, and achievement for present communities, while building the strong, sustainable foundations of continued progress for future generations.”

Participating in the unveiling—celebrated this morning in one of the Riverfront East lots, affording a broad view of much of the land ready for development—were several local dignitaries who have been instrumental throughout the 25-year history of the riverfront revitalization initiative and will remain involved as development expands east. 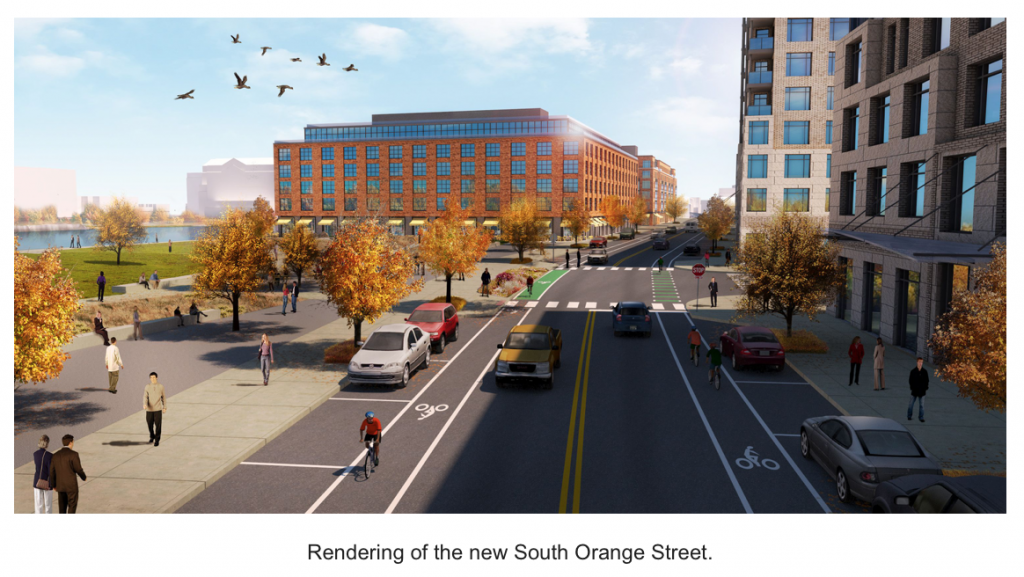 “Throughout this past year, we’ve seen what Delawareans can do when we come together around a common cause. We’re beating this pandemic because we are working together and believe Delaware will come out of this crisis stronger than ever before,” said Delaware Governor John Carney. “There are few better ways to celebrate Delaware’s strength, resilience, and bright future ahead than by focusing on the hope and promise of the Riverfront East vision. What had been two vast, unused brownfields on either side of the River will soon be united in one transformative community that will change the way people live and work in Wilmington, drive economic growth, create good jobs, and improve quality of life for all Delawareans.”

Also participating in the unveiling event was Mayor Michael Purzycki of Wilmington, who served as RDC’s first executive director from 1996–2016. 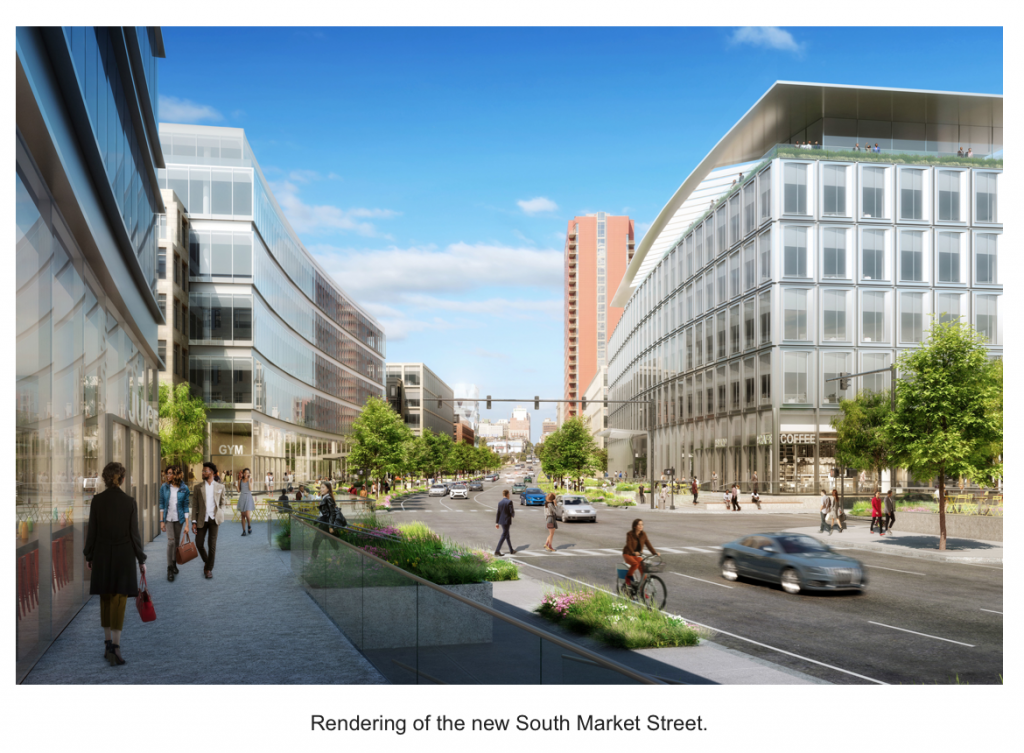 “For twenty years I had the privilege of serving as the Executive Director of the RDC. During that time many dedicated board members, governors and staff worked tirelessly to create something special out of an industrial graveyard,” said Mayor Purzycki. “Now we are moving east with more than 86 acres of land and so much to build on. The possibilities are endless, and I have no doubt RDC and its private sector partners in this project will enjoy even greater success in the future.”

DelDOT has been fully involved in the planning and made a $20 million investment to start new roadway construction and other traffic-calming initiatives that are key to creating a district that is safe and attractive for pedestrians, bicyclists and motorists alike. 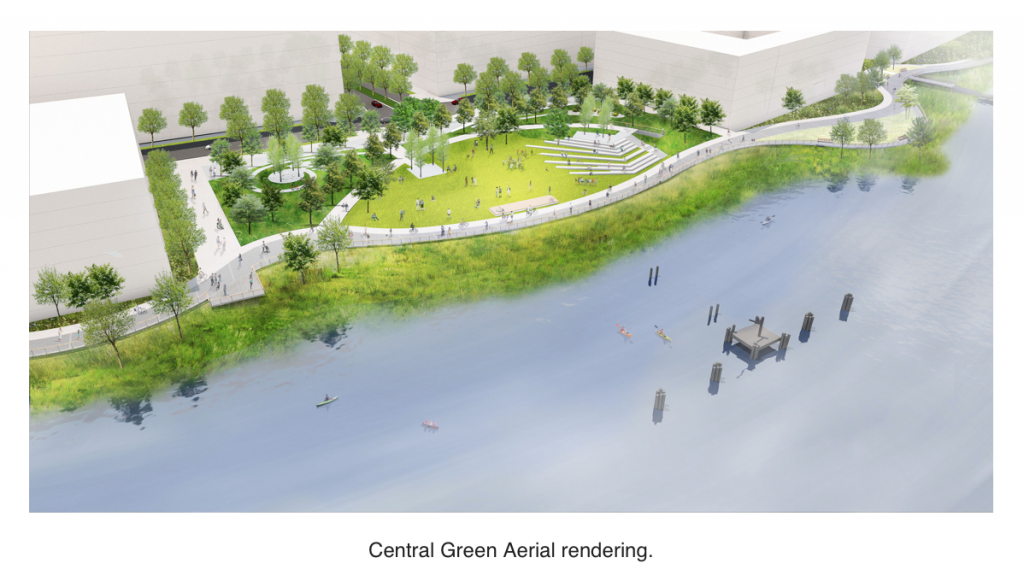 “DelDOT has made significant infrastructure improvements throughout the Riverfront area over the past several years, including the new Margaret Rose Henry Bridge and approach roads, which connects communities and will support the new Riverfront East development as it moves forward,” said Secretary of Transportation Nicole Majeski.

For families with deep Wilmington roots as well as those who are new to Delaware, Riverfront East will be a community that they can proudly call home. RDC assures the community that every element in its planning and development focuses on ensuring that Riverfront East’s opportunities and experiences are valuable and accessible to all. The ultimate vision is to develop the land in a way that puts everything anyone could ever want or need to live, visit or do business in the Riverfront East district right at their fingertips.

City Councilmember Michelle Harlee of the 4th district addresses the media Thursday, May 13, 2021, at the Louis L Redding Building in Wilmington, DE. Photo By Saquan Stimpson

“As a councilwoman, my mission includes developing private-public-sector relationships for the advancement of our community and championing innovations that foster neighborhood connectivity,” said Michelle Harlee, Wilmington City Council, 4th District. “Riverfront East exemplifies how to do these things right—ensuring that people for generations to come will have a place to enjoy nature, have new and invigorating experiences, and pursue opportunities they may never have envisioned.”

ABOUT THE RIVERFRONT DEVELOPMENT CORPORATION OF DELAWARE
In 1995, the Riverfront Development Corporation (RDC) was created by the General Assembly to bring economic vitality to Wilmington’s Christina River. Since that time, RDC has been overseeing the growth and restoration of the public and private land surrounding the river, transforming Riverfront Wilmington into one of the area’s most vibrant and exciting destinations to live, play and work. Once a largely abandoned and destitute former shipbuilding community, Riverfront West now teems with residences, hotels, restaurants, and indoor and outdoor attractions. As RDC enters its 26th year, it now pursues the same type of transformative economic, destination and residential opportunities in the development of Riverfront East. To learn more about RDC and their current and future projects, visit riverfrontwilm.com [riverfrontwilm.com] or follow RDC on Facebook [facebook.com] (Friends of Riverfront Wilmington) or Instagram [instagram.com](riverfrontwilmington).