Dover, Del. – The University of Delaware football team traveled to Dover Saturday night for the first time in program history and left with a 34-14 victory to move to 10-0 in the Route 1 Rivalry.

In front of a national audience on ESPN 2, the Blue Hens continue their trend of takeaways, creating two turnovers on the Hornets’ first two possessions of the game.

Redshirt senior Nijuel Hill intercepted a pass on the first and junior Justis Henley forced a fumble that was recovered by classmate Kedrick Whitehead on the second to set up a redshirt senior Dejoun Lee seven-yard touchdown to break the ice.

Lee had his second-straight 100-yard rushing performance, going for 109 on 14 carries and two scores. 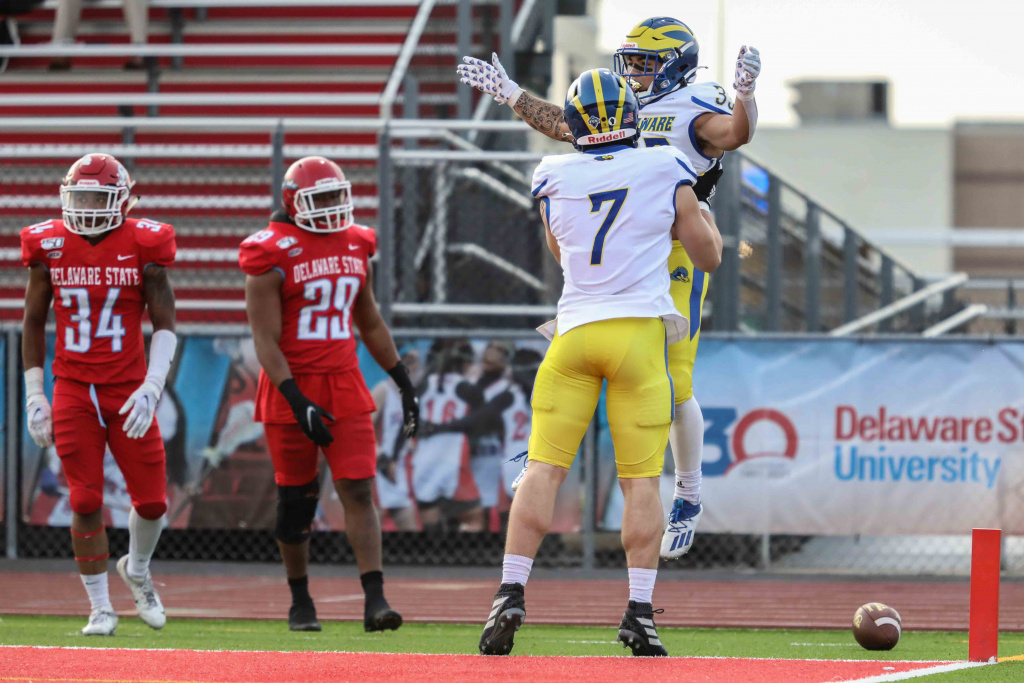 Delaware Running Back Dejoun Lee (33) and Mateo Vandamia celebrate a touchdown during a week 6 spring game between the Delaware Blue Hens and the Delaware State Hornets, Saturday, APR. 10, 2021, at Alumni Stadium in Dover, DE. Photo By Saquan Stimpson

After a Delaware State three-and-out the duo of redshirt junior Nolan Henderson and junior Thryrick Pitts connected on back-to-back plays, first for 27 then 28 yards, to help set up sophomore Ryan Coe’s first of two field goals of the night

Henderson was efficient, completing 11-of-19 for 167 yards and a touchdown, while Pitts hauled in five catches for 87 yards, marking 16-straight games with a reception.

Delaware got another two late scores in the first half as Lee found the end zone for a second time on a 14-yard carry and a redshirt junior Riah Burton interception helped set up a Pitts touchdown catch in the half’s final seconds.

The Blue Hens came out of the half-time locker room on a tear, as Lee broke off a 53-yard run to help set up a Henderson touchdown on a sneak play from the one-yard line to make it 31-0.

Delaware State did not go away in the second half, blocking two punts that would set up Hornet touchdowns. 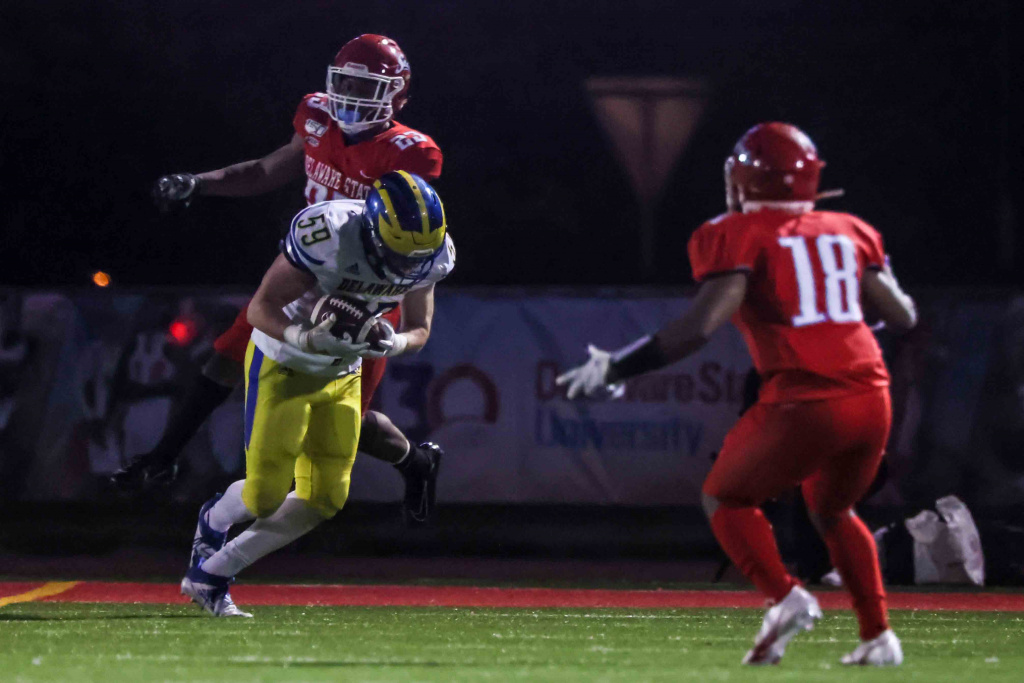 Delaware redshirt junior Jack Dinicola (59) intercepts the ball in the fourth quarter of a week 6 spring game between the Delaware Blue Hens and the Delaware State Hornets, Saturday, APR. 10, 2021, at Alumni Stadium in Dover, DE. Photo By Saquan Stimpson

The Blue Hens’ defense made a stand late in the fourth when redshirt junior Jack Dinicola ended a Delaware State drive deep in Delaware territory with an interception to seal the win.

Redshirt sophomore Noah Plack was all over the field for the defense, making a season-high eight stops while junior Johnny Buchanan and sophomore Liam Trainer each added five. Redshirt junior Colby Reeder returned to the Delaware lineup after missing all of last season, making three tackles and picking up a sack.

All eyes turn to the Battle of the Blue as the Blue Hens travel to Villanova next week for a 1 p.m. kickoff and a chance at a CAA North title.