NEWARK, Del. – It was 469 days since the University of Delaware football team took the field, and it only took 13 seconds for redshirt junior Dejoun Lee to take the opening kickoff back for a touchdown to set the tone in a 37-0 romping of Maine Saturday at Delaware Stadium to open the 2021 spring football season.

“We have a great appreciated for the commitment that has been made by the University, our president, our administration and our doctors and staff to get us to this point,” said head coach Danny Rocco. “It’s really a team effort and I talked to the team before the game and said, ‘let’s honor these people with our performance today and let’s honor our teammates who have also sacrificed in a big way,’ and I think we came out and did that today.”

It marked the first time the Blue Hens returned the season-opening kickoff back for a touchdown since 1933 when Allen Kemske lateralled to Joe Green who took in 85 yards against the University of Baltimore. 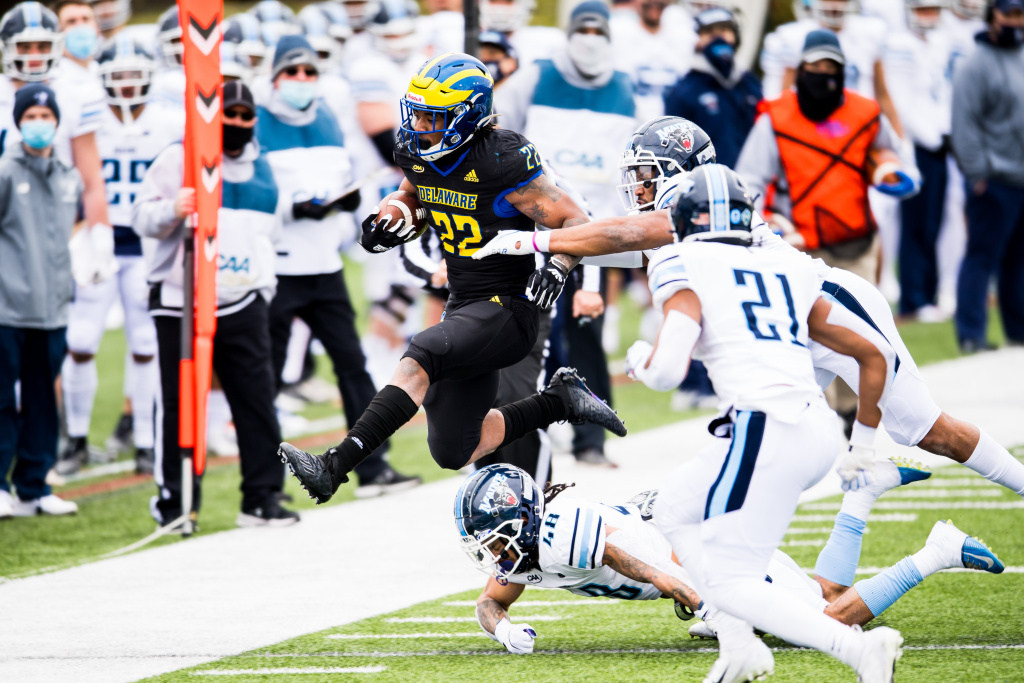 The 87-yard return was the start of a 177-yard all-purpose day for Lee who picked up another 85 on the ground off 14 carries with a rushing score and a pair of catches for five yards.

Delaware’s defense was dominant, forcing the Maine offense to nine three-and-outs, including six straight between the second and third quarters. The Black Bears compiled just 112 yards of total offense and Delaware had the time of possession advantage, holding the football for 38:14, the 12th longest time of possession in program history.

The 112 total yards given up is the lowest since 2011, when the Blue Hens also surrendered just 112 to Delaware State.

The Blue Hens took a 17-0 lead into the half after sophomore Ryan Coe connected on his first career field goal from 38 yards and redshirt junior hit senior Gene Coleman II up the left sideline for a 21-yard touchdown strike.

Coleman led all receivers with five grabs for 48 yards, and hit 50 for his career in Blue and Gold to make him just the 12th Blue Hen since 2010 to hit the mark.

Redshirt sophomore Liam Trainer and junior Johnny Buchanan were active all afternoon long for the Delaware defense, each with five tackles and Trainer picking up a stop in the backfield.

The Delaware special teams units played a major role, aside from the opening return, as Coe went 3-for- 4 on a windy afternoon on field goals and the punt unit recovered a pair of muffed punts, including redshirt junior Jake Reed’s recovering on the Maine 1-yardline to set up a Henderson rushing score.

The win is Delaware’s first season-opening shutout since the 2010 season, when the Blue Hens blanked West Chester, 31-0.

The Blue Hens stay right at home inside Delaware Stadium, hosting Stony Brook for a noon kickoff next week to continue CAA play.