WILMINGTON, Del. — This week, U.S. Senators Chris Coons (D-Del.), Ben Cardin (D-Md.) and Rob Portman (R-Ohio) introduced bipartisan legislation to revitalize housing in distressed neighborhoods. Cosponsors include Senators Todd Young (R-Ind.), Sherrod Brown (D-Ohio) and Tim Scott (R-S.C.). Currently, private development lacks in some urban and rural areas in Delaware and across the country because the cost of purchasing and renovating homes is greater than the value of the sale price of homes. The Neighborhood Homes Investment Act  [cardin.senate.gov](NHIA) would create a federal tax credit that covers the cost between building or renovating a home in these areas and the price at which they can be sold. The NHIA would also help existing homeowners in these neighborhoods to renovate and stay in their homes.

“Homeownership offers a way to build wealth and security in America, yet even before the pandemic it has been out of reach for many families in Delaware and across the country,” said Senator Coons. “This new tax credit will attract private investment for building and rehabilitating homes in distressed communities and open new homeownership opportunities for thousands of low-income families. I look forward to advancing the Neighborhood Homes Investment Act with my colleagues to take an important step toward a more equitable economic recovery from COVID-19.” 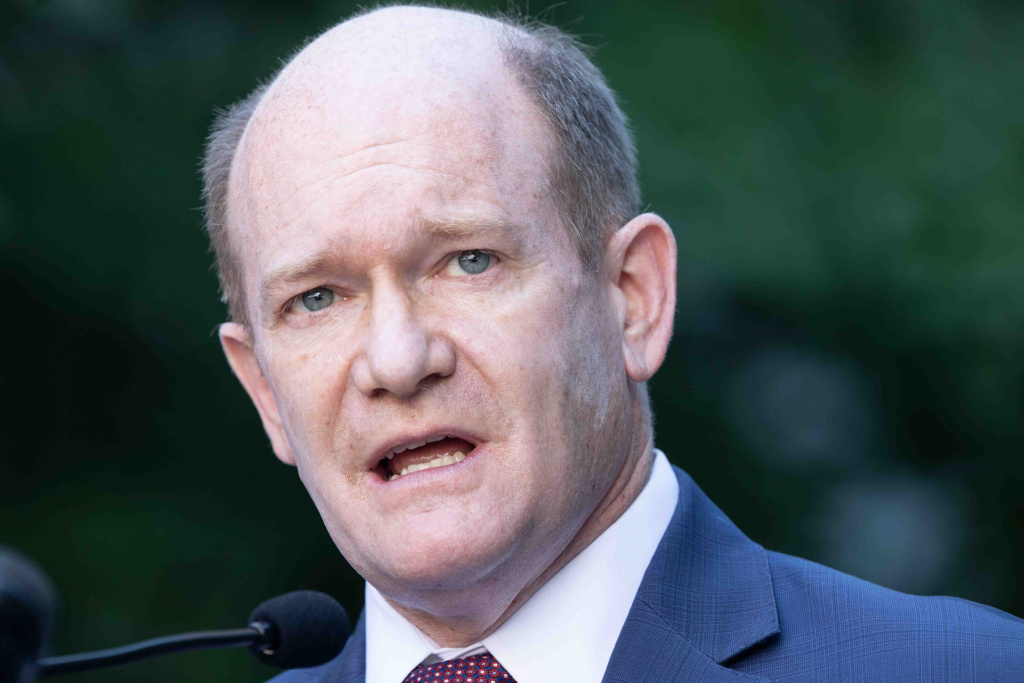 File Photo: Senator CHRIS COONS (D-Del.) gives remarks during a press conferences on the topic of the Postal Service being sabotage Tuesday, Aug 18, 2020, at the Wilmington Post Office at 500 Delaware Ave in Wilmington, DE. Photo By Saquan Stimpson

“Everyone deserves a safe and affordable place to call home and an opportunity to build equity and wealth for their family. Our bipartisan tax credit will drive investment and revitalize neighborhoods in Baltimore and across Maryland while keeping them affordable for low- and moderate-income families,” said Senator Cardin. “By building on the success of the Low-Income Housing Tax Credit (LIHTC) and New Markets Tax Credit (NMTC), we can attract investment in communities that need it most. President Biden’s campaign supported the Neighborhood Homes Investment Act, a strong sign of the growing support and need for this program now.”

“The Neighborhood Homes Investment Act provides a tax credit to rehabilitate blighted homes and help revitalize neighborhoods across America and Ohio,” said Senator Portman. “As we continue to battle the ongoing COVID-19 pandemic, this tax credit will encourage opportunity and investment in neighborhoods that are often home to vulnerable populations and marked by stagnant housing markets, foreclosures, and blighted or vacant homes. I urge my colleagues to join me in supporting this new incentive which will work in tandem with the New Markets Tax Credit, Opportunity Zones, and the Low-Income Housing Tax Credit to help Ohioans by providing desirable housing and generating new opportunities for their residents.”

“The Neighborhood Homes Investment Act will help address the housing affordability crisis, create jobs, and encourage economic development during these tough times. By providing a tax credit to remove and redevelop abandoned buildings, we can incentivize more affordable housing to be constructed in areas that are in need of rehabilitation. This legislation will benefit many struggling communities in Indiana seeking to revitalize amid this pandemic,” said Senator Young.

“Although the Fair Housing Act made housing discrimination illegal more than 50 years ago, too many of our communities – particularly Black and brown communities – still reflect historic patterns of segregation and racial disparities in wealth and homeownership,” said Senator Brown. “The Neighborhood Homes Investment Act will help overcome historic patterns of disinvestment in low-wealth neighborhoods and give families a chance to build wealth through homeownership in the communities they love.”

“Homeownership is an important part of the American Dream, and for far too long too many people have had to face an uphill climb to owning their own property,” said Senator Tim Scott. “The Neighborhood Homes Investment Act will help first time homebuyers across the United States further their dreams of being homeowners. I am proud to re-introduce this bill to help more Americans make wise investments and grow our economy.”

The NHIA could lead to the revitalization of 500,000 homes and create $100 billion in development revenue over the next 10 years. About 22% of metro areas nationwide and 25% of non-metro areas qualify for NHIA investments. NHIA targets neighborhoods that have poverty rates that are 130% or greater than the metro or state rate; have incomes that are 80% or less that area median income; and have home values that are below the metro or state median value.

The full text of the bill can be found here [cardin.senate.gov].

Investors, not the government, bear the risk – credits would be received only after rehabilitation is completed and the property is occupied by an eligible homeowner. The Treasury Department is required to provide an annual report on the performance of the program.

NHIA will require that homes constructed or revitalized under the program must be sold to homeowners making less than 140 percent of the area median income. This ensures that improved housing directly benefits members of the communities targeted by the new tax credit. In addition, these credits are only eligible for houses constructed or revitalized in census tracts that meet certain minimum metrics related to median gross income, poverty rates, and home sale prices.

The maximum credit amount is the lesser of 35% of total development costs (property acquisition plus construction and/or rehabilitation cost) or 80% of the national median home sale price. NHIA tax credits are awarded to project sponsors—developers, lenders, or local governments—through a competitive statewide application process administered by each state’s housing finance agency. Sponsors would use the credits to raise investment capital for their projects, and the investors could claim the credits against their federal income tax when the homes are sold and occupied by eligible homebuyers. State agencies would have annual allocation of either $6 per capita or $8 million, whichever is higher.