Xavier Munford scored 21 of his 25 points (9-22 fg, 3-9 3fg, 2-2 ft) in the second half for the Blue Coats, who were without the services of 76ers two-way contract players Marial Shayok and Norvel Pelle. Munford added nine rebounds and six assists in 36 minutes of action. Jared Brownridge racked up 21 points (7-16 3fg), four rebounds and four assists in 34 minutes off the bench for the home team. Brownridge has now converted seven triples on three separate occasions during the current campaign. 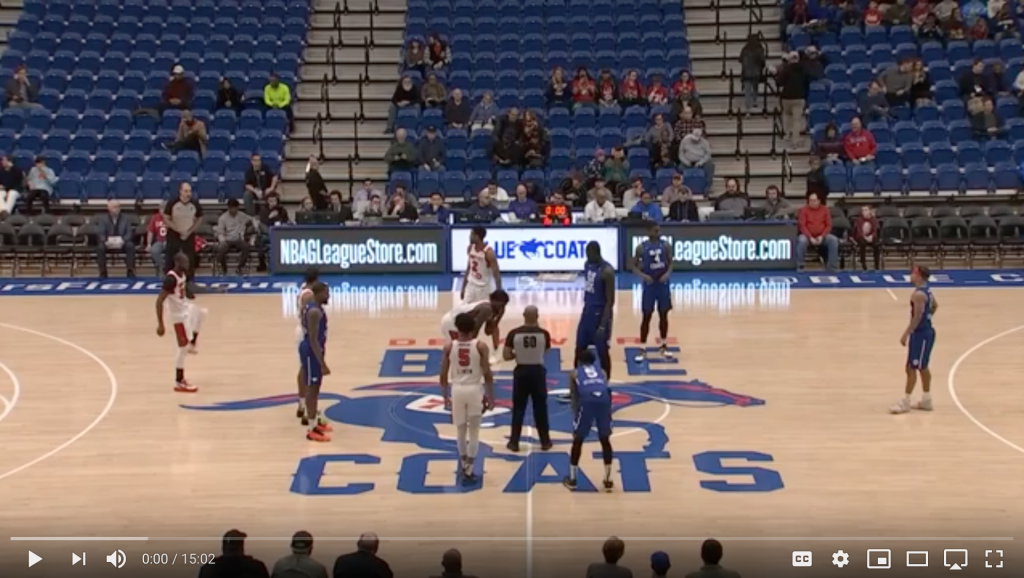 Julian Washburn added 18 points (6-13 fg, 4-9 3fg, 1-1 ft)—16 of which came in the first half—and nine rebounds for Delaware. Christ Koumadje came on strong for the Blue Coats in the second half to secure his twelfth double-double of the season with 11 points (5-6 fg, 1-1 ft) and 10 rebounds to go along with five blocked shots. Koumadje, the G League’s leading shot-blocker, has swatted at least five shots in eight games this season.

The Blue Coats entered the halftime break trailing by 11 points, after being outscored 33-25 by the Bulls in the second quarter. Both teams drained 12 3-point field goals in the first half.

Windy City’s Jaron Blossomgame led all scorers with 26 points (11-19 fg, 3-6 3fg, 1-1 ft), while also corralling a game-high 16 rebounds over a game-high 39 minutes in his season debut with the Bulls. Blossomgame was acquired from the Rio Grande Valley Vipers in a three-team trade on Saturday. The visitors had six players reach double figures, including four out of the team’s five starters. The Bulls’ bench contributed 42 points in the win, led by Tre’Darius McCallum’s season-high 19 points (7-12 fg, 5-8 3fg), 16 of which came in the second quarter alone.

The Blue Coats will embark on a three-game road trip that begins in Georgia against the College Park Skyhawks on Friday night at 7 p.m. ET. The team then travels to Fort Wayne and Sioux Falls before returning home for a meeting with the Stockton Kings next Thursday at 7 p.m. ET at 76ers Fieldhouse.