WILMINGTON DE, January 2020 – The Buccini/Pollin Group (BPG), a privately held, full-service real estate acquisition, development, and management company, and an affiliate of the National Hockey League’s Pittsburgh Penguins have jointly announced plans to develop a skyline-shaping 400-foot-tall office tower on the former site of the Pittsburgh Civic Arena.  The project has secured one of the region’s leading financial institutions F.N.B. Corporation (FNB) as a critical anchor tenant for and partner in the development.

On December 12, 2019, BPG submitted a Letter of Intent to the SEA and URA to transform 1.25 acres of surface parking lots for downtown employees and patrons of PPG Paints Arena, at the intersection of Washington Place and Bedford Avenue, into a signature tower.  The project vision calls for a 500,000 square foot sustainable building with a mix of amenities, restaurants, public parking and modern offices.  FNB will lease over 160,000 square feet of commercial space in the tower across 8 floors, with additional options to expand to accommodate future growth.  The project includes a destination outdoor gathering space that will provide access to a linear parkland that will be one of the main features of the 28-acre, mixed-use district. 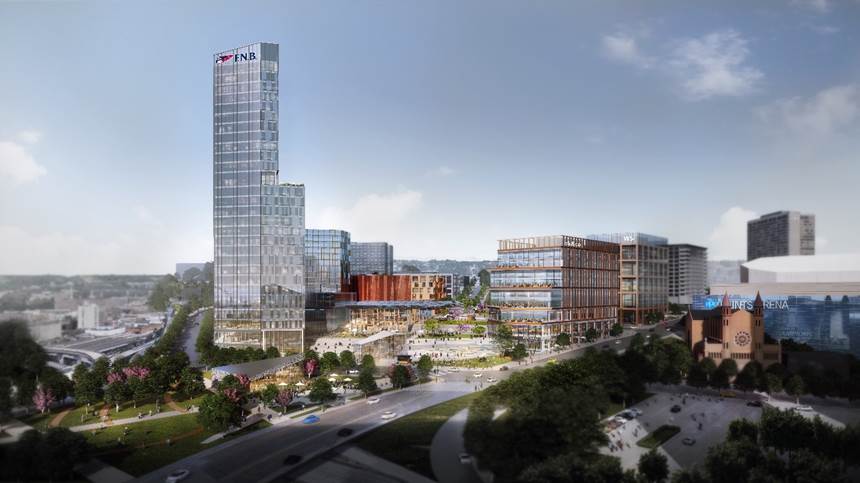 “This is one of the most significant projects in our company’s history,” said BPG’s Managing Partner Chris Buccini. “This tower will energize a long-sought transformation between growing districts in Pittsburgh’s downtown and around the universities in Oakland.  It will unlock hundreds of millions of dollars of private investment.  We have an enormous responsibility to our world-class partners and to the City to get this right after a lengthy and inclusive planning process, where a wide range of contributors worked collaboratively to lay the groundwork for Pittsburgh’s next great place.”

The formal proposal to the Authorities comes after preliminary development plans for the district’s E Block – complete with public parking, destination retail, and a live entertainment venue – were approved by City Council, the URA and the SEA over the past few months.  Combined these two projects represent nearly $350 million of development that – along with the I-579 Cap Park project and adjacent 300-unit multifamily development by Intergen and the Penguins – are the catalysts for the redevelopment of one of the most attractive urban infill sites across the entire country.

“It’s time to allow residents of – and visitors to – Pittsburgh the opportunity to enjoy the full potential of our City’s downtown and this signature development is part of just the first phase that will transform these parking lots into a dynamic, regional Center of Energy,” observed Penguins CEO, David Morehouse.

While architectural designs from Gensler are still at a conceptual level, developers are already laying out some of the critical details of their plans, including 60,000 square feet of public open space between Washington Place and Logan Street that offers some of the most compelling views of Pittsburgh’s landmarks.  These grand civic plazas will create a year-round destination that is programmed and vibrant on game days and non-game days alike.

According to Penguins Senior Vice President and General Counsel Kevin Acklin, the project will restore interconnectivity in a number of ways: “By creating a vibrant, modern tower that is anchored by one of the signature financial services companies based here in Pittsburgh, the project will re-establish the visual and physical connection that was severed by the construction of the Crosstown Expressway several generations ago.  The development team recognizes that our interests align significantly with the public interest and pledge that this critical development will spur significant investment in and commercial opportunities for adjacent underserved communities and their residents.”

The iconic tower development will create over 1,000 construction jobs across a two-year building schedule – many of which will be filled by residents of communities surrounding the project site.  Additional public benefits include economic stimulus in the form of an expanded full-time employment base; equitable sharing of tax abatements with adjacent communities; and the restoration of critical connections between the Central Business District and its vibrant Hill District and Uptown neighborhoods.  The tower’s anchor tenant plans additional investments in the adjacent communities such as their continued partnership with the Hill District Federal Credit Union and financial literacy programs across the Hill District.

As envisioned by Gensler, the signature tower anchors this vibrant development while establishing a new presence on the city’s skyline. Its glassy form is carefully sculpted to reflect the unique setting of this highly-visible, easily accessible location. An expression of crisp verticality dominates the design, visually bridging to nearby skyscrapers and downtown landmarks, while shifts in massing recognize a relationship to the lower-scale character of the adjacent development and neighborhood. These steps in form create opportunities for outdoor terraces and dramatic collaboration areas that are particularly popular with today’s creative workforce and connect commercial tenants to the activity of the park and retail space below.

Developers are also expecting to tap into anticipated foot traffic to a site that is within a 10-minute walk of over 100,000 downtown employees with a plan that calls for multiple floors of retail shopping and other amenities. The project will also create a structured parking facility with public capacity.  Design considerations support the project’s emphasis on environmental sustainability and climate resilience. The site will incorporate sustainable features based on the district’s LEED-ND plan and development partners will work to ensure that the tower itself is LEED-certified.

“We are excited about how the planning effort has progressed to date and, over the next few months, we will engage in a robust public discussion regarding this transformational project that will soon grace Pittsburgh’s skyline,” said Boris Kaplan, BPG’s Vice President of Development.  He noted that “since initial redevelopment plans were announced in the Spring of 2019, leasing interest in this central, mixed-use district has been very strong and will soon translate to additional tenancy announcements for the signature tower and future project phases.”

Developers expect final municipal approvals for the project in the next six to nine months, at which time they will break ground and commence tower construction.

For information on leasing opportunities:

For press inquiries and information from the project architect: