The community came together to close down West Seventh Street Bridge for three activities to show community pride. The event was hosted by West Side Grows Together, a coalition of residents and businesses that promote the greatness of the city. Residents covered the bridge in colors, vibrancy, and art that exudes a powerful message: unity. The weekend also brought people together for a community meal Saturday and was capped with a block party on Sunday.

Sarah Lester, Director of Cornerstone West CDC and West Side Grows Together said that it was great to see neighbors, local organizations, and community leaders come out to contribute to the community mural on the first day. The events are meant to bring residents from West Side and West Center City together.

“It’s been really awesome and effective. We had a design that was put together by Terrance Vann, who is a local artist and we put a call out to a lot of local artists from the city of Wilmington to come help facilitate so that everyone could contribute to painting it,” said Lester. 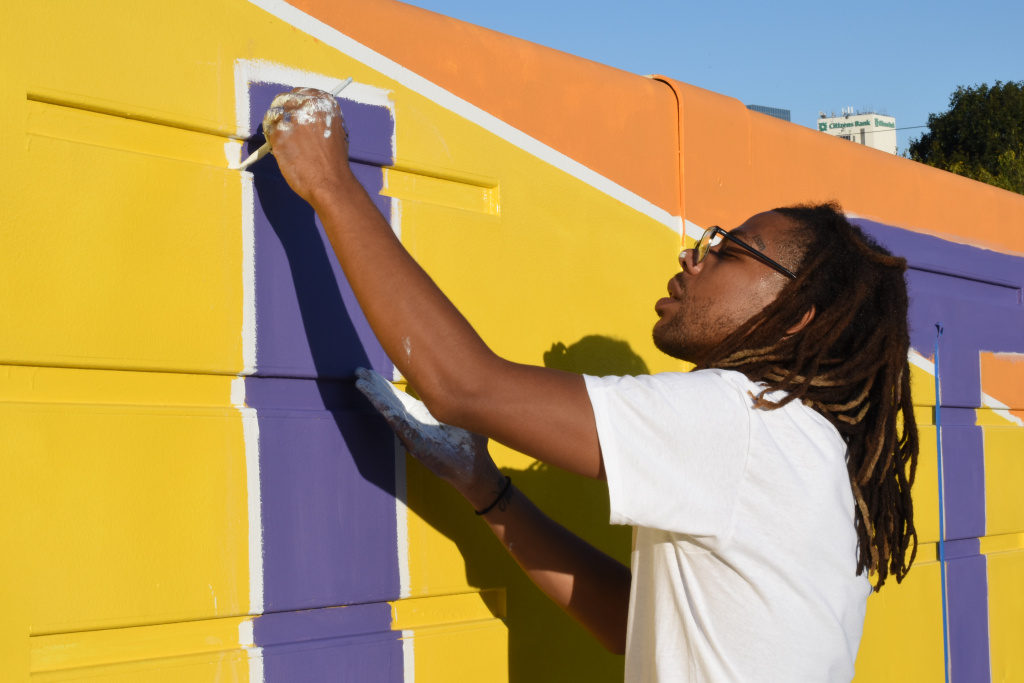 Vanity Constance, a contractor who came back to work with West Side Grows helped organize the event. She says that this was a way to have fellowship and connect neighborhoods.

“I really enjoy working with West Side Grows Together because we don’t mind sharing the template for other neighborhoods to make this possible. We’re not stingy with ideas. Anybody that wants to work with us, has a budget in place, and collect sponsors, we’re really inclusive and willing to work with other neighborhoods,” said Constance.

The event also gave two artists the opportunity to work together for the first time. Terrance Vann and Kameron Rozier shared their experience of working together at the event.

“It’s been great. It’s really taken a team to do this and everyone has really played their part and giving it 110%. Honestly, without each person, this wouldn’t have gotten done. I met so many cool people during this project. A lot of talented artists that I’m meeting for the first time. There has been talk of making the seventh street bridge a land bridge and we wanted to show what could potentially happen by painting it,” said Vann.

Rozier says he was grateful for the opportunity and that it was helpful to the community. He gave advice for the children that attended and participated in the event.

“Anybody that’s out here that’s younger, looking forward to doing something amazing like this, keep working hard in everything that you do. You’ll achieve greatness in anything that you do,” Rozier said.

While the design was put together by one person, residents and community members were able to create their own designs on the furniture.

“What’s cool right now is that we actually had some pieces of wood donated from Next Fab, which is a local organization maker space. There’s a lot of folks right now painting those pieces of furniture that we’re going to build and put together and they’re adding a little bit of their flair in those pieces,” Lester said.

“People were driving by, people were walking by amazed. People were honking their horns, giving thumbs up. So I think the community wants to see more art in their environment and it helps with inspiration, with pride in your city, and identity,” said Vann.

Lester hopes that the United Neighbors event allows for more murals being created throughout the city. “Part of the motivation for this event was around bringing our communities together across [I-95], which when it was built, really did divide the city. We hope that this is an opportunity to improve our connections across 95,” Lester said.

For more information on how to get involved, email