The Thunderdome rocked with raucous fans and they were not disappointed on this home opener weekend. Tonight, the Thunder entered the Thunderdome looking for redemption and within minutes of the puck drop Ryan Marker got the fans on their feet.  A power play early in the game gave Marker his first scoring opportunity on an assist from Aaron Taylor and Brennan Young, putting the puck in the back of the net over the shoulder of Columbus goaltender Jared Rurtlege.

Just over three minutes later Marker knocked in another goal on another assist by Brennnan Young, making his tally four goals in his first two games of his season.  Not letting up, the Thunder’s Brennan Young made a run for the net and put one between the pipes on an assist by Evan Mackintosh and Eric Masters at 12:25 in the first period.  Young’s first goal as a professional was cause for celebration and the crowd gladly joined in.  The applause was thunderous! 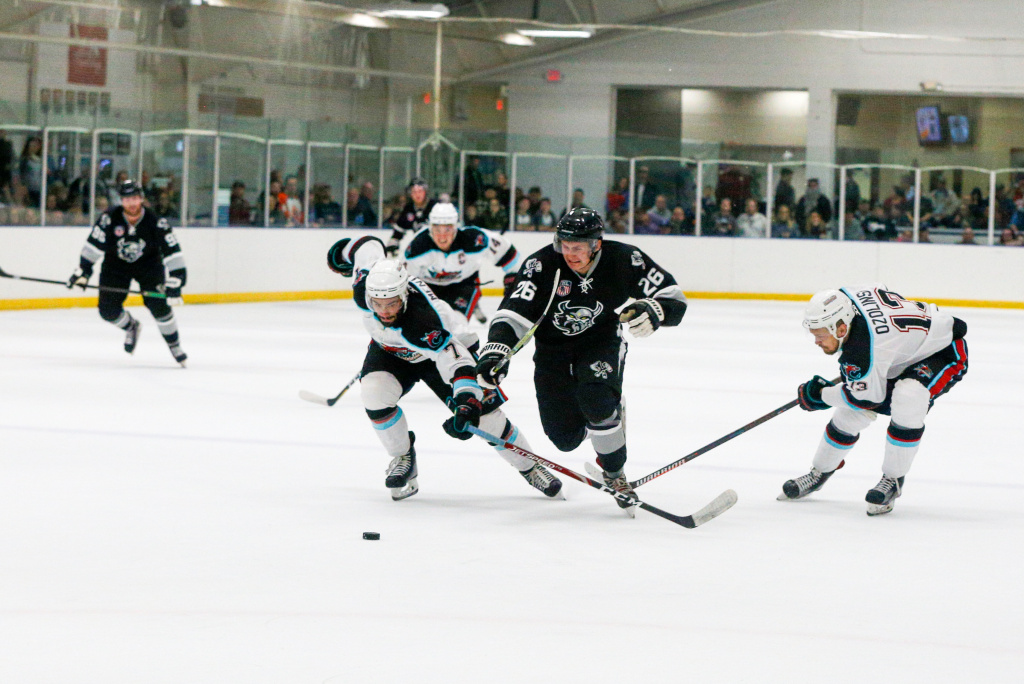 The River Dragons did not leave the second period empty handed however, as they closed out the period with a score by Chad Herron assisted by Brett Menton at 19:14 in the second period.  It would be their last goal of the game. 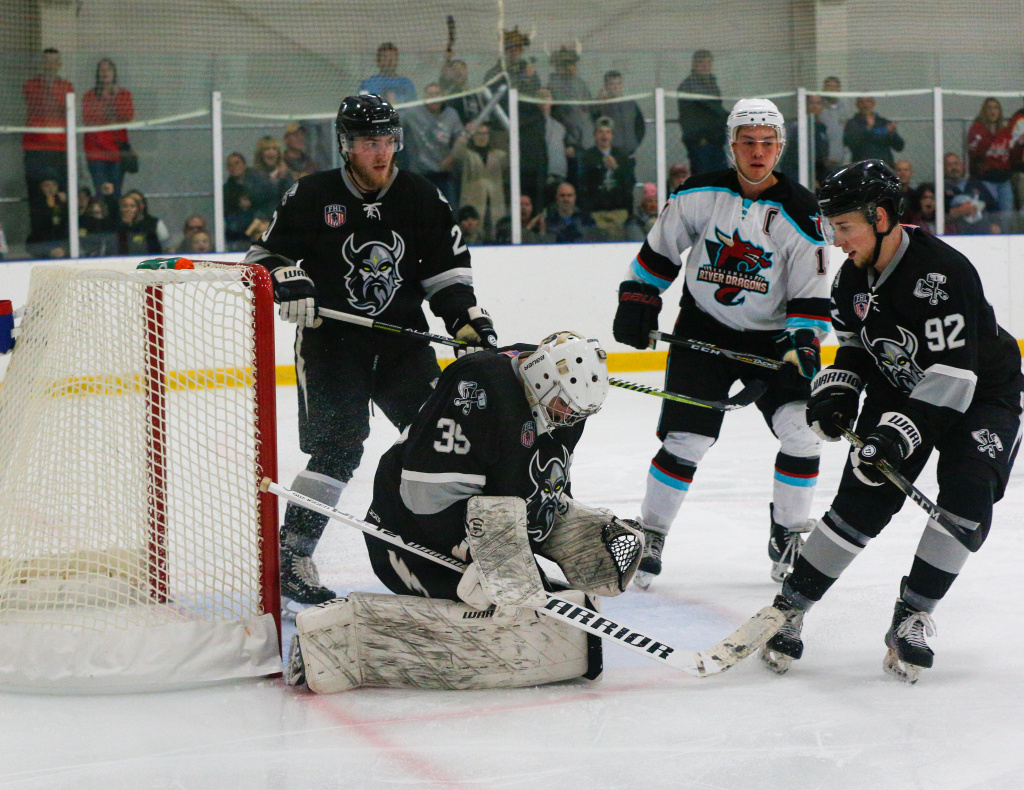 10/26/19 – Delaware Thunder goalie Aaron Taylor saves one of his 43 saves during the second game against the Columbus River Dragons at the Delaware Fairgrounds Center Ice Arena, Harrington, Delaware. (Photo by James Pernol)

Ebullient fans welcomed the Thunder as they took the ice to begin the third period.  Two more Thunder goals, one by Robin Vortanov assisted by Aaron Taylor at 15:53 into the third and a final goal by Brandon Contratto, assisted by Gavyn Connell-Helle and Ryan Marker at 17:51 was the only power play goal in the game and, another Thunder first, a hat trick by Brandon Contratto.

The offensive Thunder effort was bolstered by Aaron Taylor’s strong presence in goal, logging 43 saves in the net.  Morgan Hudson also made his first appearance in net in the third period.  Jared Rutledge saved 12 of the 15 shots against goal and Rylan Pashovitz saved 10 of 15 shots against the River Dragon’s goal while he was in goal.

The gloves were dropped several times as tempers flared between the two teams as Alex Basey and Jonathan Evans squared off near center ice and Basey showed why he’s one of the team captains this year. Newcomer Gavyn Connell-Helle also dropped the gloves earlier in the game with Evans showing he wanted to be in the Thunder lineup.

Coach Charles F. Pens, Sr. was not surprised by his team’s success but couldn’t have been happier to log this first win of this historic season opener before a capacity crowd in the Thunderdome. “We knew we could play with them.  I had every confidence if we stuck to our game plan and played our style we could beat them and we did.  I couldn’t be more proud of this special group we have here in Delaware.”