What started as a dream across the street from an empty lot in a window of a yellow home, is continuing to have a huge impact on the community in the form of an urban farm.

The E.D Robinson Urban Farm, located at 12th and Brandywine Street was renamed 10 years ago after community activist and former Councilman Eric Daryl Robinson, who passed away on January 20, 2015.

The community commemorated him by unveiling a plaque in his honor. 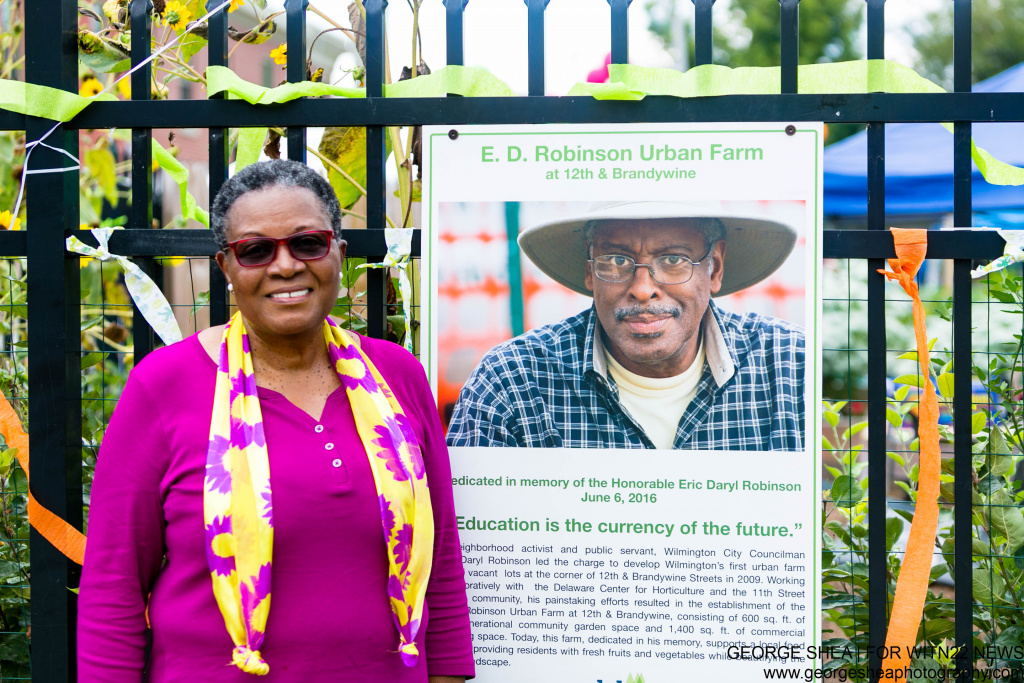 Adrienne Spencer, urban farm coordinator, said the goal of the community garden is to put fresh fruits and vegetables on the tables of families in the Northeast section of the city.

“This area is considered a food desert. Anyone who lives around here knows that there’s only one grocery store on this side of town, the Food Lion, which is more than a mile away. If you don’t have a car, you’re out of luck when it comes to getting fresh vegetables and fruits. Even if you do have a car, the prices are prohibited [high] for low income families,” Spencer said. “We installed this urban farm and community garden in an effort to provide access to low income families who otherwise wouldn’t have access.”

The market at the farm is open daily. Spencer said that most of the produce sells for between one to three dollars a pound and/or each depending on what the product is. They also give away food sometimes. On Thursdays, she goes to the Old Brandywine Village to sell the food. On Fridays, Spencer goes to the VA hospital in Wilmington to do the same thing.

Priscilla Sirmans, a resident of Wilmington and fiance of the lead singer of the band Best Kept Soul, said she was encouraged to make her own vegetable bed as a result of seeing volunteers cut her vegetables off the vine for her at the urban farm.

“I’m going to spiral some zucchini, throw pesto in it, some grilled shrimp, and tomatoes,” she said.

“It’s a time for us to embrace the community. This is a good way because it’s about healthy eating. As a minority we have the highest rate of high blood pressure, obesity, and various health issues that we don’t address and most of it is because we just don’t eat right,” Oliver said.

Spencer said she hopes the community becomes more involved in coming to the urban farm and changes their eating habits. She said that she feels discouraged because the community garden is located in an obscure area. The 11th Street bridge closure has also made the urban farm less accessible. 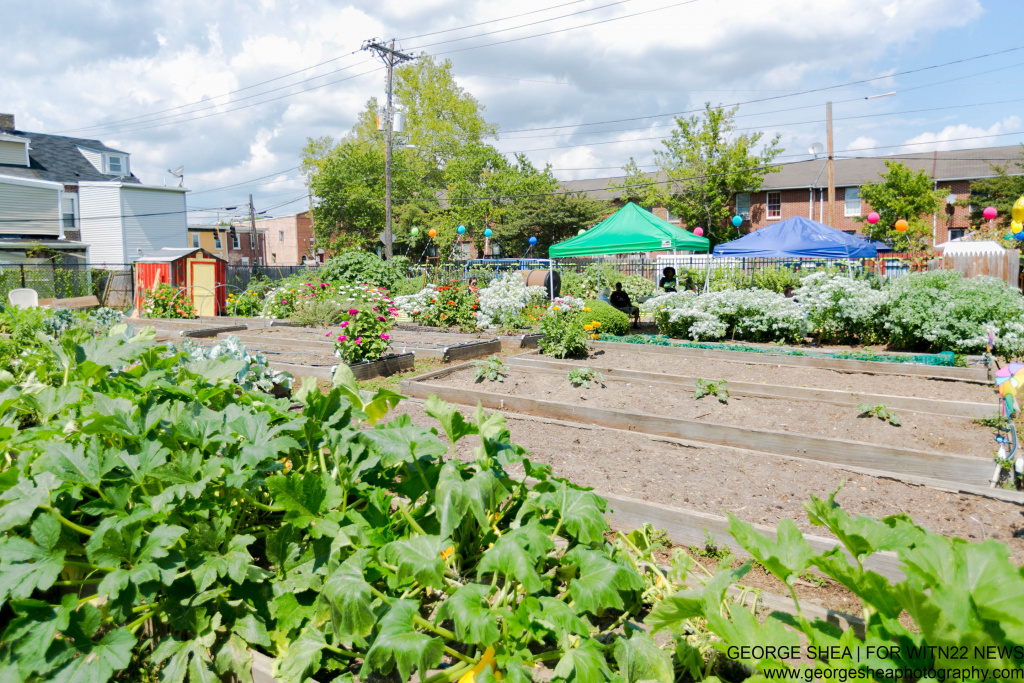 “It never ceases to amaze me how many of them [the local kids] don’t know how to use a rake or a shovel. It’s important that we indoctrinate young people with putting good things in their body and understanding that unless you treat your body right, it’s not going to treat you right,” Spencer said.

Ruth Arias, Youth and Community Gardens Coordinator goes to the Clarence Fraim Boys and Girls Club and teaches the children about healthy eating and how to maintain their garden. She also assists communities throughout Wilmington with their gardens. “It’s like a mini-gardening 101 workshop. They learn from the beginning how to identify seeds, how to start plants from seeds, and how to use the food once it’s harvested,” Arias said.

Rosa Robinson, widow of Robinson expressed his passion behind the creation of the urban farm. “Eric Daryl Robinson, husband, father, grandfather, and great grandfather was an amazing man. Out of all the projects, this urban farm was at the top of the list. He was passionate about providing fresh fruits and vegetables for residents in the neighborhood as well as those outside of the neighborhood. He also set it up so they could rent beds and grow it themselves,” she said.

Robinson says that her husband was not alone. “It was a combination of the City of Wilmington, City Council, Delaware Department of Agriculture, and the community who all pitched in to make this come true. It was a dream come true,” Robinson said.

The Delaware Center for Horticulture partnered with the Kingswood Community Center on a neighborhood building blocks grant to upgrade the urban farm including adding new vegetable beds.

Vikram Krishnamurthy, executive director for Delaware Center for Horticulture, reflected on the work of the former councilman, who was involved in the tree planting. 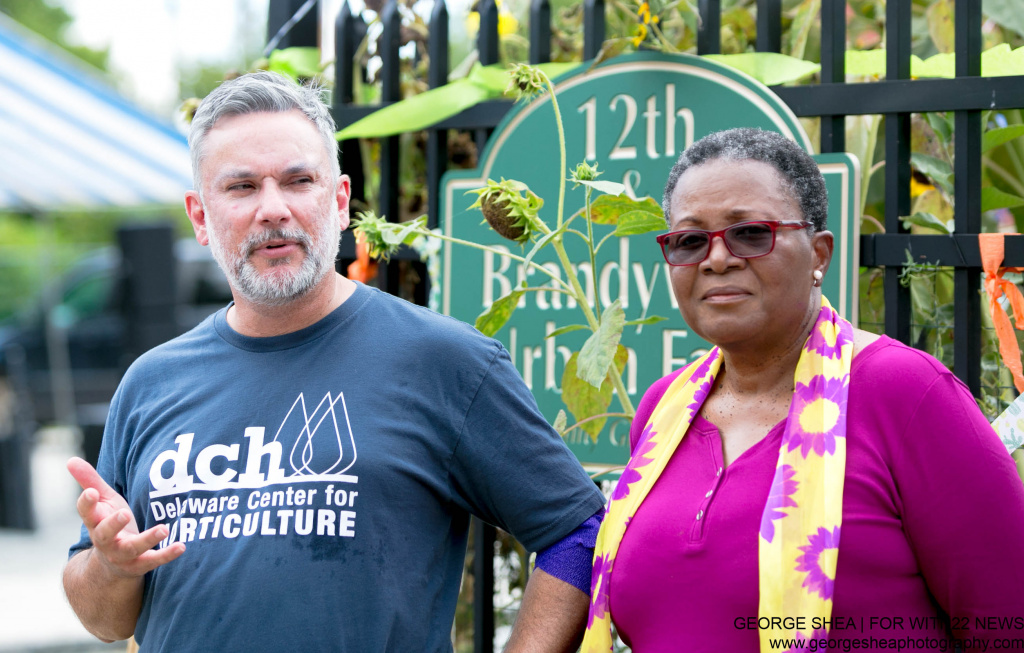 “I remember recognizing right away that Eric did not do anything halfway. His original vision for this neighborhood was really tree planting. In our experience at the Delaware Center for Horticulture, working with Eric, it showed us the importance of listening to the community. When we really listened to what the community wanted to see here, the vision for the urban farm here was born. They were looking for a place to gather, a place to grow their own food, to take ownership of their lives in terms of the health benefits, the community relationship benefits, and all the great things it does for the neighborhood,” Krishnamurthy said.

“We have an abundance of food. It helps the community to see the importance of being one with the earth. We put our hands into it. It’s the same thing if you nurture a child, you nurse the seeds. This is what you produce. If we nurture our children, this is what we produce. Great, beautiful flowers and beautiful, hearty food that contributes to the well-being of society,” said Shabazz.

Helen Fischel, who recently joined the Delaware Center for Horticulture as Director of Education, said she had a chance to talk to many of the people involved in the project and has responded positively to the community garden.

Various attendees mentioned what they would like to see in the future for the urban farm.

”Grants are tight. I was glad through City Council, as a third district representative, I was able to find Ms. Spencer some funding to keep this event going on. I intend on helping her raise some money throughout the year. If we start early, when this time comes, we will be set to go,” Oliver said.

“I would love to see more children learning in this garden than there are now,” said Fischel.

“I’d love to see it maintained. It is 10 years old so it needs some upkeep and that you get the resources to do it. That it just doesn’t become another project, that it becomes a part of the fabric, operations, policies, and practices of how this community functions and how other communities function. One with nature,” Shabazz said.

Robinson gave the community one way to keep her late husband’s vision and passion alive. “Plant and grow, and eat the vegetables,” she said.