Philadelphia Union fought for a 2-1 victory in front of a packed house at Talen Energy Stadium Sunday evening, with a late Jack Elliott goal ensuring three points stayed in Philly. The victory keeps the Jim Curtin’s men in first place as they prepare to face CJ Sapong and Chicago Fire next weekend.

The Union used the same lineup that ran through DC United a week ago, with Andrew Wooten and Kacper Przybylko paired up top. The Dynamo handed Christain Ramirez his first start since arriving from LAFC and kept Alberth Elis on the bench in his return from a one-game suspension.

Early in the match, Houston sought to overload Ray Gaddis on the left but Alejandro Bedoya’s covering runs kept the visitors at bay.

In the fifth minute, a Jack Elliott turnover sent the Dynamo off on a counterattack that Philly cleared after a scramble near the box. 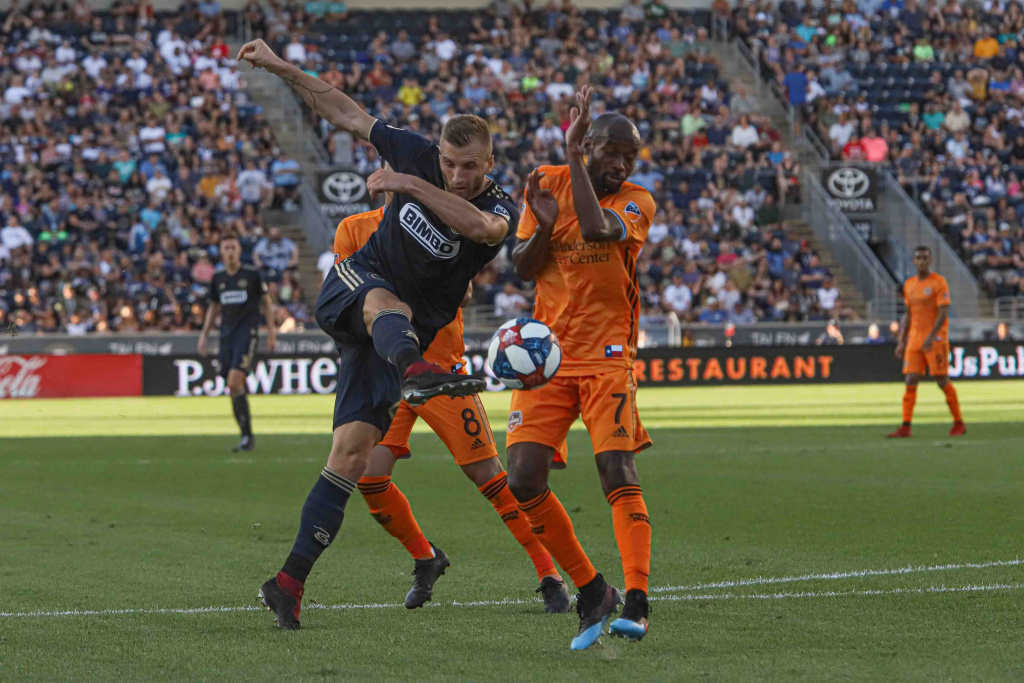 Philadelphia Union Attacker KACPER PRZYBYLKO (23) attempts a shot in the box in the first half of a Major League Soccer match between the Philadelphia Union and Houston Dynamo Sunday, Aug. 11, 2019, at Talen Energy Stadium in Chester, PA. Photo By Saquan Stimpson

Houston responded down the left and Memo Rodriguez put in a cross that was too high for Mauro Manotas when it looked as though the striker had Collin beat at the back post.

That threat spurred Philly forward and when Marco Fabian found Haris Medunjanin in transition, the Bosnian pushed the ball ahead to Przybylko and played a combination before the Przybylko found the ball once more and fired a low shot that squibbed through Joe Willis’ legs. Przybylko celebrated by holding up an O Captain My Captain shirt that benefits Ale Bedoya’s causes after the midfielder spoke out in DC last weekend.

As the half progressed, the Union’s leading goalscorer remained the most dangerous player on the pitch. In the 33rd minute his hard driving run through the right channel resulted in a cutback that didn’t find a finisher.

In the 43rd minute, a sudden equalizer pinned the Eastern Conference leaders back. Damarcus Beasley threw in a cross from the left and Christian Ramirez was on hand to tuck it past Andre Blake.

The Dynamo nearly pulled ahead at the start of the second half when Ramirez tapped past Balke from the center. Jack Elliott was following the play and cleaned up to allow Philadelphia to settle.

Next it was Manotas luring Blake out of his net on the left and finding space for a lashed ball across the face of goal where Kai Wagner pushed it out of play.

Medunjanin responded with a beautiful ball from the left that nearly found Andrwe Wooten flying it down the right channel. Jamiro Monteiro and Ilsinho joined the fray and the match quickly became one of Philly attacking and Houston dropping back. Alberth Elis came on for the visitors but few chances were created.

The Union thought they had taken the lead That changed in the 78th minute when a ball into the box from Monteiro was deflected into the center by Collin. Jack Elliott charged through as he sought to get onto the end of it and when the ball bounced up and punched the crossbar, Elliott nodded it down into the net for the winner.

Fafa Picault entered late but it was clear that the Union were the more likely team to score.

Philly remains atop the Eastern Conference as they prepare to face off with Chicago Fire next weekend at 8:00 p.m. ET on PHL17.

The Union return to Talen Energy Stadium in two weeks for an Alumni Night showdown with DC United at 7:30 p.m. ET on August 24.