Graduates of the 99th Wilmington Police Academy being sworn in.

Wilmington Mayor Mike Purzycki and Police Chief Robert Tracy today participated in a graduation ceremony marking the completion of the 99th Wilmington Police Academy, which began in March. The ceremony was held at the Chase Center on the Riverfront for family, friends, and supporters of the 32 new police officers, who will begin their new assignments with the Uniformed Services Division on Monday.

The addition of these new officers brings the total number of officers on the police force to just under the 315 authorized strength, or budgeted police officer positions, for the City’s police department. More than 175 individuals applied to become a part of this academy, and the academy class continues the department’s trend of diversity in hiring. Eleven members of the new class are minority cadets, including five black males and two Hispanic males, as well as four females – one white, two black and one Hispanic. Of the 32 recruits, seven previously lived in Wilmington while the others are in the process of moving into the City after graduation in order to satisfy Wilmington’s five-year residency requirement. 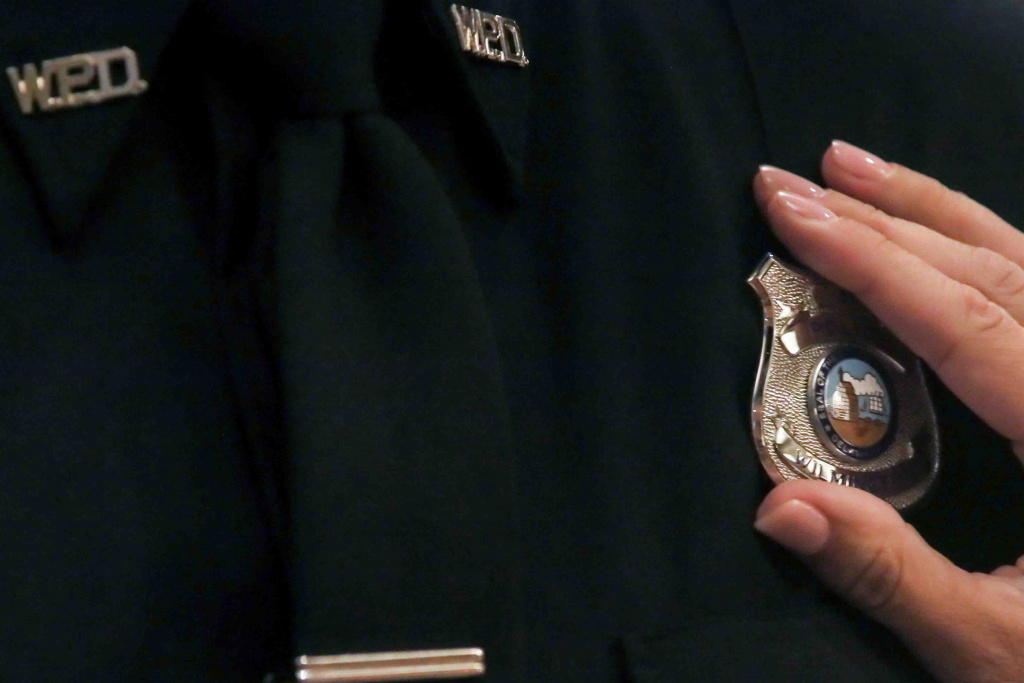 The new officers will each be assigned to work with a more senior police officer who will serve as their field training officer for at least six months to develop experience on police patrols.

During his remarks today to the graduates, Mayor Purzycki welcomed the new officers to the “Wilmington family” and a police department that aspires to be counted among the very best in the nation. “It is my belief that for our city government to become great, and for Wilmington to take its place among the very best cities in the nation, then all of our employees must be a part of an undivided whole…committed to excellence in everything we do,” said the Mayor.

The Mayor recognized that public safety is essential to Wilmington’s success story, and he asked the officers “to resist cynicism and the human temptation to judge others,” adding that “humility and empathy will serve you well in such an emotionally demanding profession.”

“Congratulations and welcome to this proud department and to our fine city,” the Mayor said in closing.

Chief Tracy spoke about the intensive training that the new officers have received, and about the opportunity, they have been given to join the ranks of the Wilmington Police Department.

“You’ve been trained in cutting-edge policing, investigative and intelligence strategies – the same strategies that our department has embraced, and which have led to remarkable reductions in violent crime in Wilmington,” Chief Tracy said. “We’ve seen the effects of these strategies, and we’ve also seen a great deal of interest in our academies. At a time when police departments across the country struggle to fill academies and reach their authorized strength, we had more than 175 applicants for 32 slots.”

Chief Tracy highlighted the rigorous training that the recruits have undergone, and the thorough preparation they have received through the academy. Beyond training and educational programming around the fundamental principles, procedures, and techniques of law enforcement, the new officers also learned about the tenets of community policing, cultural diversity, police legitimacy, and leadership – key components to the departmental strategy of fostering strong relationships with the community.

“Community is everything for us,” said Chief Tracy. “You’ll attend community and neighborhood meetings, participate in block parties and develop relationships with the residents we serve. And those experiences will only make you better police officers and public servants.”

Officer Erik Thomas, who graduated in June 2018 from the 98th Wilmington Police Academy, received the Leonard Kittner Award at today’s ceremony, which recognizes the outstanding body of work on the part of a police officer who graduated from the previous academy class.