The Late Robert O. Wright, I, is Honored with Ceremonial  Street Sub-Naming in Northeast Wilmington

Restating his words as expressed in the Executive Order, Mayor Purzycki said today that Robert O. Wright, I, was a devoted and dedicated family man who, despite numerous challenges and obstacles, never lost his entrepreneurial spirit and drive to succeed. “Wilmington is pleased to honor individuals such as Robert Wright, who relentlessly pursue their lifelong dreams all the while actively engaging with and having a positive impact on their community,” the Mayor said.

Born in Wilmington, Delaware to the late Jacqueline L. Dorsey Wright Evans and Harry S. Wright, Robert O. Wright, I, developed a love of funeral service as a teenager after spending time talking with and learning about the life of a funeral service professional and business owner from Mr. Edward R. Bell.

Robert was educated in Wilmington public schools, graduating from P.S. DuPont High School in 1974 and going on to attend Clark College (now Clark Atlanta University), where he was initiated into Alpha Phi Alpha Fraternity, Incorporated and became a Life Member as soon as he was eligible. 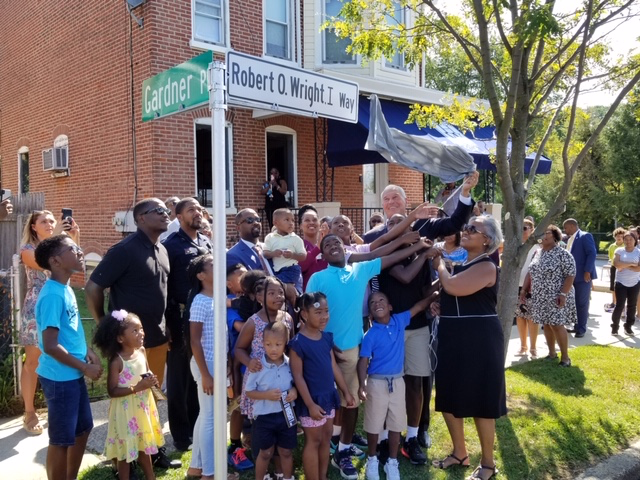 Photo courtesy of the mayor’s office

In pursuit of his dream of becoming a licensed funeral director and business owner, Robert enrolled in the American Academy of McAllister Institute of Funeral Service in New York City. After graduating from McAllister in 1981, he completed his apprenticeship and opened the House of Wright Mortuary, Inc., on August 9, 1987. Meanwhile, Robert married Deborah Ann Brinkley in 1982; he would go on to father three sons: Maurice J. Wright, Robert O. Wright II, and Justen A. Wright. Later in his career, Robert obtained a license to practice in the state of Maryland and expanded the business to include additional locations in Smyrna and Penns Grove, New Jersey.

Robert joined Bethel African Methodist Episcopal (AME) Church under the pastorate of Rev. Dr. Silvester Scott Beaman in 1993 and was a faithful member who served both on the Trustee Board and Usher Board as well as sang with the King of Kings Choir.  He was a president of the Bethel AME Church‘s Usher Board, two-time president of the Interdenominational Church Ushers Association of Delaware, a Worshipful Master of Star in the East Lodge #1, and a Noble of Suakim Temple #60.  Additional organizational affiliations include being a Prince Hall Mason, a Life Member of Alpha Phi Alpha Fraternity, Inc., and a member of the Inter-denominational Church Ushers Association and National United Church Ushers Association of America. Robert was also a member of the National Funeral Directors Association and the National Funeral Directors and Morticians Association, and he was appointed by former Governor Jack Markell to serve on the Delaware State Board of Funeral Service.

Robert received numerous awards and recognitions during his lifetime, including the 1990 Leon V. Anderson Brother of the Year Award from the Gamma Theta Lambda Chapter of Alpha Phi Alpha Fraternity, Inc., the 1997 Clark College United Negro College Fund Distinguished Service Citation, and an award from the Interdenominational Church Ushers Association (ICUA) of Delaware.