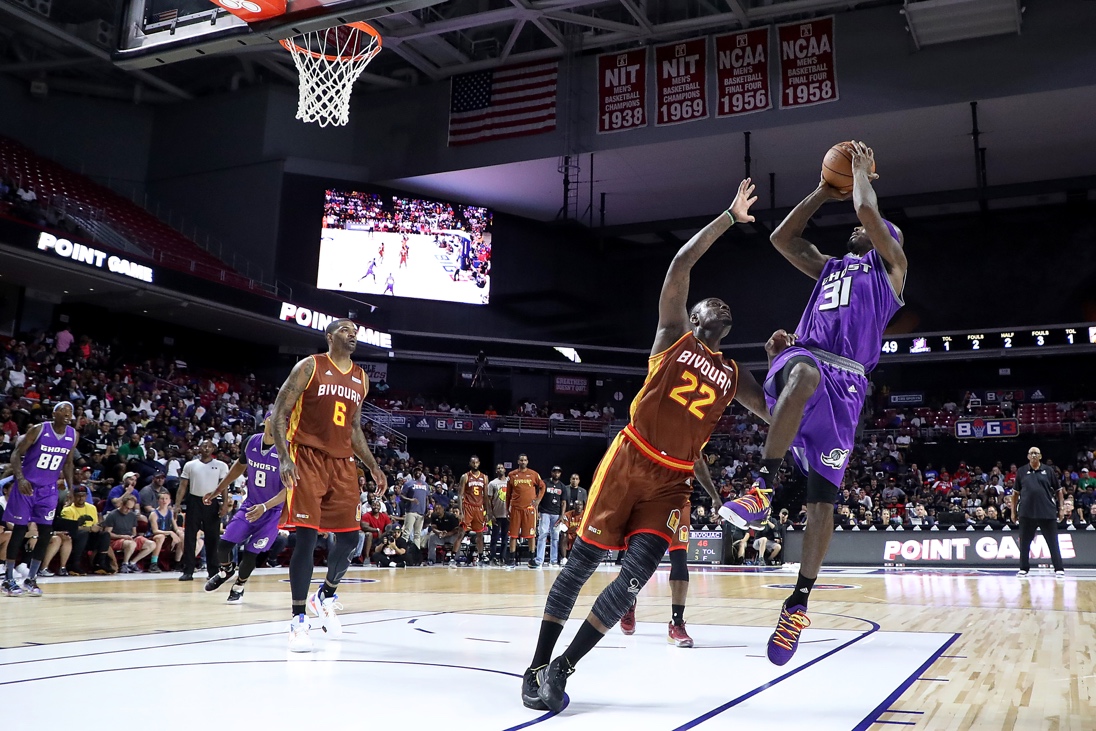 The opening game at Liacouras Center featured the “Battle of the Unbeatens” as expansion team Bivouac took on Ghost Ballers.

Bivouac and Ghost Ballers are coached by former NBA greats Reggie Theus and NBA Hall of Famer George “Iceman” Gervin, respectively, and it showed in the teams’ scrappiness and stellar defensive play.

Ricky Davis (20 points) got the Ghost Ballers off to a fast start as he scored 18 of the teams’ first 26 points. Bivouac used a combination of Josh Smith (10 pts, 7 reb) and Will Bynum (17 pts) to help claw back after a slow start. The duo scored 19 of the team’s first 23 points and contributed to a 9-0 run late in the first half.

The teams continued their back-and-forth intensity in the second half, quickly trading early buckets.  Safeguarding a one point lead, Bynum blew past Mike Taylor (10 pts) with a smooth, highlight-real iso from the top of the key. Taylor remained focused, hitting back-to-back shots and creating several Bivouac turnovers.

Smith helped keep Bivouac in the game late with a few, key defensive stops. After a couple of missed opportunities, Jamario Moon (21 pts, 9 reb) pulled out the victory with an easy put back.

In Game 2, the Aliens looked to grab their first franchise win as they tackled perennial BIG3 playoff team 3 Headed Monsters.

Hall of Fame Coach Gary “The Glove” Payton didn’t pull any punches during his halftime interview saying the 3 Headed Monsters simply lacked energy in the first half.

Looking to crank up the fire early in the second half, the Aliens turned to their big man Greg Oden (5 pts, 4 rebs) to establish a low post presence after a lackluster first half which saw him sent to the bench after two early fouls.

With key contributions from Rashard Lewis (18 pts, 8 rebs), Reggie Evans (10 pts, 9 rebs), and Larry Sanders (8 pts, 10 rebs), 3 Headed Monsters answered their coaches’ challenge whittling down the deficit and bringing their team to a game point with a 47-44 lead.

Lewis has nothing but a game-winner on his mind as he nailed a clutch 3-pointer to close out a 14-0 run and secure a 50-44 victory to move his team to 2-0 on the season.

It was an early “Battle of the Big Men” as Tri-State’s Amar’e Stoudamire (18 pts, 6 rebs) and Power’s Glen “Big Baby” Davis (10 pts, 5 rebs) came out hot. Cuttino Mobley added to the action and put on a show in his hometown, scoring nine points in the first half and pacing the Power to a 25-20 lead.

First-year player Mychel Thompson continued to find ways to contribute to his team, chipping in  6 points while pulling down 11 rebounds. Thompson found Mobley (23 pts, 7 rebs) down low with a mismatch against Robinson for the game-winning assist to close out the contest.